On Darwin and gender 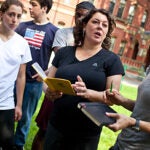 They dig the past

Though he was a scientist, his restrictive public views often reflected Victorian norms, website shows

In 1864, German naturalist Ernst Haeckel wrote to naturalist Charles Darwin, promising to send some marine shells that displayed “a detailed representation of the Rhizopod organism.” But for the “female members of your family,” Haeckel quickly added, the intricate shells would make nice “embroidery patterns.”

This fragment of correspondence illustrates what historians now see as a vast 19th century gender divide, even among scientists renowned for the assumed dispassion of their work. But most of those scientists 150 years ago regarded the gender divide as merely the way that things were. Feminine work was largely unnoticed; the work of males — with Darwin as a famous example — was widely celebrated.

Starting this week, a new website, in part the work of Harvard students and faculty, is helping to illuminate Darwin’s own views on the gender issue. It also is beginning to show how the social pressures of an age may alter even science’s vaunted neutrality.

In print, most famously in “The Descent of Man,” Darwin upheld the gender standards of his time. A man reaches “a higher eminence, in whatever he takes up” than a female, he wrote in that 1871 investigation of sexual selection. Meanwhile, a woman’s intuitive powers “are characteristic of the lower races,” he wrote. Officially, Darwin celebrated men as energetic, inventive, and courageous. He cast women as deficient in arenas “requiring deep thought, reason, or imagination.”

For a man “famous for swimming against the tide and questioning established thought, the statements Darwin made about gender in published works … were remarkable only for their orthodoxy,” observed University of Cambridge scholar Philippa Hardman, who helped to launch the new site.

But in his private correspondence, a different, more nuanced Darwin emerges. (He had nearly 2,000 correspondents, including close to 150 women.) “I should regret,” Darwin wrote in one 1877 letter, “that any girl who wished to learn physiology should be checked.”

His letters also show that he was grateful for the scientific insights that his female correspondents provided. In 1872, Darwin wrote to New Jersey naturalist Mary Treat, “Your observations and experiments on the sexes of butterflies are by far the best … which have ever been made.” He then urged Treat to publish her findings “in some well-known scientific journal,” which she did.

In his letters, Hardman said, Darwin was anxious not to shock or unsettle his correspondents, but he was also “more than happy to rely on the scientific observations made by women.” Still, the letters do not reveal a whole new Darwin, she said. Instead, they “complicate the picture rather than offer an entirely new story.”

The website is part of the Darwin Correspondence Project, for which Hardman writes a blog on Darwin and gender. The project was founded in 1974 to locate, compile, annotate, and publish letters by and to the 19th century’s most celebrated naturalist. The University of Cambridge effort has located around 15,000 letters, written between 1821 and 1882, and has published 18 of a projected 30 volumes. In 2009, the project added a satellite branch at Harvard, where general editor Janet Browne is Aramont Professor of the History of Science.

Hardman said this is the first pilot education website of Darwin and Gender, a research initiative funded over three years beginning in 2009 by the Bonita Trust. That’s good timing, said Sarah S. Richardson, an assistant professor of the history of science at Harvard. The correspondence project is “just now moving chronologically into the 1870s, the era in which Darwin wrote about the evolution of human sex differences.”

Richardson’s course, “HS 138: Sex, Gender, and Evolution,” which she began offering in the spring, forms the core of the website. Hardman supplied a set of suggested letters for teachers, and Richardson supplied her full course syllabus. The site is intended for teachers wanting to bring the issue of Darwin and gender into the classroom.

The course idea was to read relevant scholarship, including Martha McCaughey’s “The Caveman Mystique” (2008) and Cynthia Russett’s “Sexual Science: The Victorian Construction of Womanhood” (1989), and then have students analyze correspondence (some of it not yet available to scholars), write original responses, and comment on the research goals of the Darwin and gender initiative.

“This is a very good example of students getting to do an activity in class that contributes to original scholarship,” said Richardson.

The site features the work of five undergraduates from Richardson’s course. Nora Garry ’14 penned a comic strip. Mark Khanin ’12 wrote an essay about Darwin’s contrasting attitudes to his male and female children. Jasmine Rencher ’11 decided on a newspaper spoof, “Darwin Shaves!” — and the implications of losing his beard, that great signifier of masculinity. Kim Tichmann ’13 explored the origins of Darwin’s courtship theories, and observed: “While most people view Darwin as simply an icon, the Darwin Correspondence Project can help us view him more fully — as a man.” Amanda Villani ’14 produced a TV-game show video on Darwin and gender. She later said that Richardson’s course opened her eyes to how the same primary sources can be manipulated to support a variety of scholarly claims.

And that context is important. Darwin sometimes employed a condescending tone with female correspondents, and his published work relied on Victorian stereotypes of womanhood. But this doesn’t mean that he was a sexist, said Villani, just “a product of his time.”