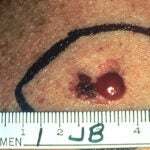 A consortium led by scientists at the University of Oxford and Harvard Medical School has constructed the world’s most detailed genetic map.

A genetic map specifies the precise areas in the genetic material of a sperm or egg where the DNA from the mother and father has been reshuffled in order to produce this single reproductive cell. The biological process whereby this reshuffling occurs is known as “recombination.” While almost every genetic map built so far has been developed from people of European ancestry, this new map is the first constructed from African-American recombination genomic data.

“This is the world’s most accurate genetic map,” said David Reich, professor of genetics at Harvard Medical School, who co-led the study with Simon Myers, a lecturer in the Department of Statistics at the University of Oxford.

African-Americans often have a mixture of African and European ancestry from over the last 200 years. Reich and Myers are experts in analyzing genetic data to reconstruct the mosaic of regions of African and European genetic ancestry in DNA of African-Americans. By applying a computer program they wrote, Anjali Hinch, first author and a post-graduate student at Oxford University’s Wellcome Trust Centre for Human Genetics, identified the places in the genomes where the African and European ancestry switches in almost 30,000 people, detecting about 70 switches per person. These areas corresponded to recombination events in the last few hundred years. Thus, the researchers identified more than 2 million recombination events that they used to build the map.

The researchers were surprised to find that positions where recombination occurs in African-Americans are significantly different from those in non-African populations.

“The landscape of recombination has shifted in African-Americans compared with Europeans,” said Hinch.

The findings will be published in the July 21 edition of Nature.

An independent study that used a similar strategy to build a genetic map in African-Americans — led by University of California, Los Angeles, scientists Daniel Wegmann, Nelson Freimer, and John Novembre — will be published in Nature Genetics.

Scientists have only recently begun to explore the genetic differences between individuals and populations — and the role those differences play in human health. In that respect, the first draft of the human genome, completed a decade ago, was only a starting point for understanding the genetic origins of disease.

As researchers begin to parse those differences, a crucial tool is a genetic map, which in this case was based on where recombination has occurred across the genome.  Recombination, together with mutation, accounts for all the genetic (and thus physical) variety we see within species. But while mutation refers to the errors introduced into single locations within genomes when cells divide, recombination refers to the process by which huge chunks of chromosomes are stitched together during sexual reproduction.

But this stitching process occurs only at specific locations. In a prior set of papers, Myers and his colleagues identified a DNA code, or motif, that attracted part of the recombination machinery, a gene called PRDM9. Knowing the motif, a string of 13 DNA letters, researchers could zero in on the locations where recombination typically occurred — “recombination hot spots.”

“When recombination goes wrong, it can lead to mutations causing congenital diseases, for example diseases like Charcot-Marie-Tooth disease, or certain anemias,” said Myers.

The researchers discovered that the 13 base-pair motif that is responsible for many of the hot spots in Europeans accounts for only two-thirds as much recombination in African-Americans. They connected the remaining third to a new motif of 17 base pairs, which is recognized by a version of the recombinational machinery that occurs almost exclusively in people of African ancestry.

These findings are expected to help researchers understand the roots of congenital conditions that occur more often in African-Americans (due to mutations at hot spots that are more common in African-Americans), and also to help discover new disease genes in all populations, because of the ability to map these genes more precisely.

The study was possible because of collaboration from 81 co-authors, using DNA samples from five large studies that have been carried out to study common diseases such as heart disease and cancer, funded by the National Institutes of Health, the Department of Defense, and many private foundations.

Said James Wilson, a professor at the University of Mississippi Medical Center who was responsible for coordinating the collaboration, “All the co-authors worked together in an incredibly collegial way to put together the enormous set of samples and high quality genetic data that made this study a success.”

The recombination map is here.