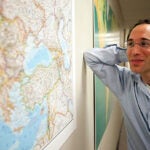 Bioengineers at Harvard have, for the first time, explained how the blast of an exploding bomb can translate into subtly disastrous injuries in the nerve cells and blood vessels of the brain.

The research addresses two major aspects of traumatic brain injury (TBI), with significant implications for the medical treatment of soldiers wounded by explosions.

Papers published in the journals Proceedings of the National Academy of Sciences (PNAS) and the Public Library of Science’s PLoS One provide the most comprehensive explanation to date of how abrupt mechanical forces cause catastrophic physiological changes within the brain’s neurons and vasculature.

“These results have been a long time coming,” says principal investigator Kevin Kit Parker, a professor of bioengineering at Harvard’s School of Engineering and Applied Sciences (SEAS) and a major in the U.S. Army. “So many young men and women are returning from military service with brain injuries, and we just don’t know how to help them.”

When the brain encounters a jarring force, such as an exploding roadside bomb, its delicate tissue slams against the skull. The result, if the patient survives, can be a temporary concussion, a more dangerous hemorrhage, or long-term TBI, which can lead to the early onset of Parkinson’s or Alzheimer’s diseases.

Inspired by Parker’s own military experience, the Disease Biophysics Group (based at SEAS and at the Wyss Institute for Biologically Inspired Engineering at Harvard) has taken up the cause. Using cutting-edge tissue engineering techniques — essentially creating a living brain on a chip — biologists, physicists, engineers, and materials scientists have been collaborating on the study of brain injury and potential targets for treatment.

Their studies show that integrins, receptor proteins embedded in the cell membrane, provide the crucial link between external forces and internal physiological changes.

Integrins connect the structural components within the cell (such as actin and other cytoskeletal proteins) with the extracellular matrix that binds cells together into tissue. Collectively, this network of structural and signaling components is referred to as the focal adhesion complex.

Parker’s research has demonstrated that the forces unleashed by an explosion physically disrupt the structure of the focal adhesion complex, setting off a chain reaction of destructive molecular signals within the nerve cells of the brain.

Inside the neuron, integrins normally mediate the activation of the proteins RhoA and Rho kinase (ROCK). When the focal adhesion complex is disturbed, the Rho-ROCK signaling pathway goes haywire: it directs the motor protein actin to retract the cell’s armlike axons, disconnecting the neurons from each other and collapsing the cellular networks that constitute the brain

“Our research has shown that abrupt mechanical forces, such as those from a blast wave and transduced by integrins, can result in neural injury,” says Matthew A. Hemphill, who with Borna Dabiri and Sylvain Gabriele, is a lead author of the paper in PLoS One. Dabiri and Hemphill are currently graduate students at SEAS, and Gabriele is a former postdoctoral fellow in Parker’s lab.

“Encouragingly, we also found that treating the neural tissue with HA-1077, which is a ROCK inhibitor, within the first 10 minutes of injury, reduced the number of focal swellings,” explained Dabiri. “We think that further study of ROCK inhibition could lead to viable treatments within the near future.”

A second direction of research in Parker’s lab has solved another mystery in TBI, explaining why cerebral vasospasm, a dangerous remodeling of the brain’s blood vessels, occurs more commonly in TBI caused by explosions than in other types of brain trauma.

“Until now, other researchers looking at TBI focused on ion channels and membrane poration, and it was generally accepted that cerebral vasospasm was only caused by hemorrhaging. It turns out that it’s much more complicated than that,” says Patrick W. Alford, a former postdoctoral fellow in Parker’s lab and lead author of the paper in PNAS. “Integrins and Rho-ROCK signaling appear to be players in both diffuse axonal injury and cerebral vasospasm.”

As reported in PNAS, the forces exerted on arteries are different during an explosive blast than during blunt force trauma. Subarachnoid hemorrhage, which can occur in very severe head injuries, is known to cause vasospasm, but Parker’s new research shows that the unique force of an explosion can also cause vasospasm by itself.

The blast from an explosion creates a surge in blood pressure, which stretches the walls of the blood vessels in the brain. To study this, Parker’s team of bioengineers built artificial arteries, made of living vascular cells, and used a specialized machine to rapidly stretch them, simulating an explosion. While this stretching did not overtly damage the cellular structure, it did cause an immediate hypersensitivity to the protein endothelin-1.

Endothelin-1 is known to stimulate vascular cells to absorb calcium ions, which affect actin — the same protein involved in the retraction of axons.

In the 24 hours following the simulated blast, the vascular tissues hypercontract and undergo a complete phenotypic switch, disrupting the overall function of the tissue. Both of these behaviors are characteristic of cerebral vasospasm.

Most importantly, as in the neural tissue, the Rho-ROCK signaling pathway plays an important role in the behavior of actin and the cells’ contraction. Parker’s team found that inhibition of Rho soon after the injury can mitigate the harmful effects of the blast on the brain’s vascular system.

“We have established a toe-hold as we try to climb up on top of this problem,“ says Parker. “In many ways, this work is just the beginning.”

Parker’s co-authors on the paper in PNAS are Alford, Dabiri, Goss, Hemphill, and Mark D. Brigham, a graduate student at SEAS.

The Disease Biophysics Group received financial support from the Defense Advanced Research Projects Agency (DARPA) Preventing Violent Explosive Neurologic Trauma (PREVENT) Program, the Department of Defense, and the Harvard School of Engineering and Applied Sciences (SEAS). The researchers also gratefully acknowledge the use of facilities at the Harvard Center for Nanoscale Systems, a member of the National Nanotechnology Infrastructure Network (NNIN), which is funded by the National Science Foundation (NSF).