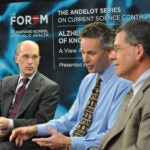 Study to test effectiveness of WHO Safe Childbirth Checklist

Harvard School of Public Health (HSPH) has been awarded a $14.1 million, four-year grant from the Bill & Melinda Gates Foundation to test the effectiveness of an innovative checklist-based childbirth safety program in reducing deaths and improving outcomes of mothers and infants in 120 hospitals in India. The program was developed by the World Health Organization (WHO) and HSPH.

HSPH Associate Professor in Health Policy and Management Atul Gawande and co-principal investigator Jonathan Spector, research associate in health policy and management at HSPH, are leading the BetterBirth clinical trial. The study will evaluate the impact of the WHO Safe Childbirth Checklist program at hospitals in Uttar Pradesh, India.

Of 130 million births annually in the world, nearly 350,000 result in the mother’s death, 1 million in intrapartum stillbirth, and another 3.1 million in infant death during the neonatal period. Most deaths occur within 24 hours of delivery. In Uttar Pradesh the mortality rate for women giving birth is estimated at 440 per 100,000 births, vs. 254 per 100,000 births in the country as a whole. (By comparison, the maternal mortality ratio in the United States is 13 per 100,000 births.) Uttar Pradesh is one of India’s least developed states, with 31percent of its 190 million people living in poverty.

“To reduce these deaths, pregnant women are increasingly encouraged to deliver in health facilities instead of at home. But success requires a basic standard of care that is often missing,” said Gawande, who is also a surgeon at Harvard-affiliated Brigham and Women’s Hospital. “At times, the problem is inadequate resources, but often the issue is a lack of hand-washing or screening for use of available antibiotics. We designed a simple strategy to help facilities upgrade their performance.”

The HSPH team worked with the WHO Departments of Patient Safety, Reproductive Health and Research, and Maternal, Newborn, Child and Adolescent Health to develop the Safe Childbirth Checklist program, which is expected to be released later this year.

“The program aims to transform behavioral patterns at the bedside — at times when the successful delivery of essential practices is crucial in order to reduce harm,” said Spector, who is a neonatologist at Harvard-affiliated Massachusetts General Hospital.

“Widely accepted protocols and guidelines have been distilled into a simple, user-friendly checklist program for frontline workers. It is introduced through initial safety training and reinforced through periodic coaching,”  he added.

The WHO Safe Childbirth Checklist program was developed from 2008 to 2010 through a comprehensive review of existing guidelines and consultation with an extensive network of front-line workers, policymakers, and other health advocates around the globe. It was field tested at 17 birth sites in a number of countries, including India, Pakistan, Nigeria, Kenya, Ghana, and China.

The one-page checklist features “pause points,” natural break points in the flow of clinical care when the  medical team confirms that  essential tasks have been performed. The checklist program targets the major killers of mothers and babies worldwide. For mothers, those include bleeding, infection, elevated blood pressure, and prolonged or obstructed labor. For babies, it’s asphyxia, infection, and complications of prematurity.

The WHO Safe Childbirth Checklist program is based on the success of WHO’s Safe Surgery Checklist. Beginning in 2007, under Gawande’s leadership, HSPH and WHO developed a 19-item checklist that reduced surgery-related deaths and complications by more than one-third at eight pilot sites around the globe. Independent researchers have confirmed the dramatic effectiveness of the approach. The WHO Surgical Safety Checklist has since been introduced in more than 4,000 hospitals worldwide.