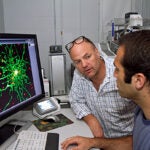 Experts on Alzheimer’s disease expressed hope of rapid progress against the condition Friday (July 22) even as they acknowledged that there’s little medical science can do today to help patients.

The panel, which appeared online in a presentation of The Forum at Harvard School of Public Health, also discussed a new Harvard School of Public Health and Alzheimer’s Europe survey showing Alzheimer’s to be the number two health fear — behind cancer — in four countries. The survey, led by Robert Blendon, professor of health policy and political analysis, also showed that the vast majority of respondents would want to know they had the disease even though there is nothing physicians can do to treat it.

Blendon, who appeared at the event with Adrian Ivinson, founding director of the Harvard NeuroDiscovery Center, and Matthew Baumgart, senior director of government affairs for the Alzheimer’s Association, said the survey also showed that most people mistakenly believe that there is a definitive test to determine whether one has the disease and that there are things physicians can do to slow the disease’s course.

In fact, panelists said, there is no single test to definitively identify the disease, especially before symptoms appear, and little doctors can do once a patient is diagnosed with it.

Alzheimer’s disease afflicts more than 5 million people in the United States alone, half of whom are undiagnosed. Getting older is the primary risk factor, with the disease usually beginning after age 60 and affecting the parts of the brain controlling thought, memory, and language. The number of Americans with the disease has doubled since 1980 and could reach 13.5 million by 2050, according the U.S. Centers for Disease Control and Prevention.

The survey, released July 20, sampled the knowledge and attitudes of 2,678 people in five countries, the United States, France, Germany, Spain, and Poland. Though it showed that Alzheimer’s was the number two health fear in four countries, respondents in the fifth, Poland, ranked it third, behind cancer and heart disease.

Overall, respondents were acutely aware of the condition. More than 85 percent said they’d see a doctor if they were experiencing memory loss and confusion to determine if the cause was Alzheimer’s. The survey showed the disease’s reach: majorities in all countries know or have known someone with it and three in 10 had family members with the condition.

The survey showed that there is room for additional education, since just 40 percent were aware that Alzheimer’s is fatal.

Panelists discussed the usefulness of early testing, should a test become available. Baumgart said that even without treatment available, it has been shown that earlier diagnosis is helpful for patients, giving them time to get their affairs in order and participate in the decisions about their care. Early diagnosis also lessens stress on caregivers. In addition, Baumgart said, about a fourth of patients with memory problems and cognitive dysfunction don’t have Alzheimer’s, but instead a treatable condition, such as depression or a vitamin deficit.

By 2050, Baumgart said, Alzheimer’s spending in the United States is expected to rise from $183 billion today to $1 trillion, most of which will be paid through government Medicare and Medicaid programs. Given public concern, rising incidence, and growing cost, governments will be under increasing pressure to devote funding to Alzheimer’s research, panelists said.

Ivinson said significant progress has been made in the past decade and several avenues of research are waiting for funding to move ahead. Though recent research has been promising, the public’s expectation of results within five years — as shown by the survey — may be too optimistic, he said.

“There’s real reason for optimism today compared with 10 years ago. There are lots of avenues of inquiry wanting funding,” he said.

As treatments become available, the need for a reliable test that can detect the disease in its early stages will increase, Ivinson said. Alzheimer’s can damage the brain for 10 years before symptoms appear.