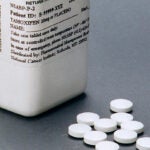 When estrogen isn’t the culprit

Cancer is not invincible but its weaknesses can be difficult to detect. An effort known as Project Achilles — named after the Greek warrior whose one vulnerability led to his undoing — was launched to develop a systematic way of pinpointing these weak spots.

In their largest and most comprehensive effort to date, researchers from the Broad Institute of Harvard and MIT and Dana-Farber Cancer Institute, a Harvard affiliate, examined cells from more than 100 tumors, including 25 ovarian cancer tumors, to unearth the genes upon which cancers depend. One of these genes, PAX8, is altered in a significant fraction of ovarian tumors — nearly one-fifth of those surveyed in the study. The researchers results appear online July 11 in Proceedings of the National Academy of Sciences.

“In this project, we’re looking for all of the Achilles’ heels of cancer. That is to say, we’re looking for any instance where you inactivate a gene and affect the survival of cancer cells,” said William Hahn, a senior associate member of the Broad and an associate professor at Dana-Farber and Harvard Medical School. The researchers silenced or suppressed thousands of genes using short hairpin RNAs (shRNAs), which offer a way to predict the effect of a drug or therapy that targets individual genes.

Recently, researchers involved in another major cancer project, The Cancer Genome Atlas (TCGA), reported that 1,800 genes in the ovarian cancer genome are repeatedly amplified, or present in extra copies. The Project Achilles team silenced more than 10,000 genes in its search for those that are needed for cancer cells to grow and survive. By harnessing the TCGA data, the researchers could rapidly pinpoint which of these 1,800 genes are essential to ovarian tumor growth.

Hahn describes the convergence of these two projects at the Broad Institute as representing a fundamental change in cancer research. “Not only can we characterize what genes are mutated or altered, but we can also simultaneously assess which of those are important functionally,” he said.

The team used a pool of more than 54,000 shRNAs from the library developed by the Broad’s RNAi Platform. “The methods that we have developed in the RNAi Platform make it practical and relatively inexpensive to screen shRNAs at a genomic scale, and our first area of application was in cancer research,” said David Root, director of the RNAi Platform. “The scale-up to the 100 cell lines reported in this most recent paper was a big challenge, but we also saw a huge opportunity. With data on many more cell lines, we would have far, far greater power to identify functionally important cancer targets.”

The latest Project Achilles research also addresses a fundamental question in cancer biology. For decades, cancer has been classified based on tissue of origin, but within the past 10 years, many scientists have suggested that it may be more revealing to classify tumors based on genetic mutations, regardless of where the cancer began.

“Many of us in the genomics field — including myself — were thinking that maybe someday, we won’t care about the organs that cancers come from, that we will only care about the genetic mutations that drive them,” said Hahn. “What’s emerging from TCGA and our Project Achilles work is that lineage will continue to be important.”

Hahn suspects that in some cases, this may have to do with the way that different organ systems develop. One of the top genes that the Project Achilles team detected in ovarian cancer cells is PAX8, which plays an important role in the development of the female reproductive system. The team found too many copies of PAX8 in 16 percent of the ovarian cancers they examined. In cell lines where PAX8 was overexpressed, suppressing PAX8 led to cell death.

In addition to their findings in ovarian cancer, the researchers found that looking across cancer types can reveal cancer-causing genes, but only if a large number of samples is considered.

“A traditional way of doing these experiments was to compare one cell line versus another cell line,” said Hahn. “When you test that, it turns out that’s not a very robust way of doing things. What we show in this paper is that if you have eight or nine cell lines that you’re comparing against each other, then your confidence in the candidates that emerge increases.”

In the coming months, Hahn and his team plan to pursue the PAX8 result. Although the gene encodes a transcription factor, a class of master control proteins that have been pessimistically labeled “undruggable,” the researchers will team up with the Broad’s Chemical Biology Platform to look through hundreds of thousands of unique compounds to find one that can neutralize PAX8. “PAX8 is a transcription factor and it’s considered a difficult or impossible target to make drugs against, but that’s exactly the kind of project that the Broad likes to take on,” said Hahn.