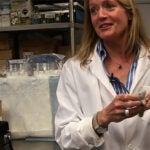 A strategy that has been shown to reduce age-related health problems in several animal studies may also combat a major cause of age-associated infertility and birth defects.

Investigators from Harvard-affiliated Massachusetts General Hospital (MGH) have shown that restricting the caloric intake of adult female mice prevents a spectrum of abnormalities, such as extra or missing copies of chromosomes that arise more frequently in egg cells of aging female mammals. Their report appears in this week’s online Early Edition of the Proceedings of the National Academy of Sciences USA.

“We found that we could completely prevent, in a mouse model, essentially every aspect of the declining egg quality typical of older females,” says Jonathan Tilly, director of the Vincent Center for Reproductive Biology in the MGH Vincent Department of Obstetrics and Gynecology, who led the study. “We also identified a gene that can be manipulated to reproduce the effects of dietary caloric restriction and improve egg quality in aging animals fed a normal diet, which gives us clues that we may be able to alter this highly regulated process with compounds now being developed to mimic the effects of caloric restriction.”

Many studies have found that animals whose food intake is restricted but still sufficient to avoid malnutrition live longer and show fewer signs of aging than do animals given access to as much food as they want. The long-term effects of a caloric restriction (CR) diet in humans are being investigated in ongoing studies, but some health improvements, including reductions in cholesterol levels and other cardiovascular risk factors, have already been reported. An earlier study by Tilly’s group found that female mice maintained on a CR diet during most of their adulthood maintained their fertility into very advanced ages, even after being allowed to resume free feeding.

A key step in the development of reproductive cells — sperm and eggs — is a process called meiosis, in which sperm and egg cell precursors with two copies of each chromosome are divided into specialized reproductive cells with a single copy of each chromosome. When mature egg and sperm cells fuse, the resulting embryo has two copies of each chromosome, one from the male and one from the female. Meiosis-associated abnormalities, such as extra or missing copies of chromosomes, are more common in the eggs of aging animals and are responsible for a greater incidence of infertility, miscarriage, and birth defects such as Down syndrome, which is caused by an extra copy of chromosome 21.

Following up on their earlier finding on the impact of CR on fertility in mice, the MGH team took a closer look at metabolic factors that may underlie those results. They first followed two groups of female mice from young adulthood (3 months of age) to 1 year, an age when egg quality and fertility normally would be greatly diminished. One group was allowed to free-feed throughout adulthood, while the other was maintained on a CR diet for about seven months and returned to free-feeding for the last month of the study period. While the free-fed mice showed the expected age-related decline both in the number of egg cells released at ovulation and in how many of those eggs were mature and ready for fertilization, the eggs cells of the aged CR mice more closely resembled healthy eggs of young adult females during their prime reproductive life.

Analysis of chromosomes and other meiosis-related aspects of the egg cells revealed significant abnormalities in cells from aged free-fed mice, while egg cells of the aged CR mice showed no evidence of aging-associated abnormalities. Since the age-associated decline in egg cell quality has been associated with changes in the distribution throughout the cytoplasm of mitochondria — subcellular structures that provide cellular energy — the researchers looked at the effects of diet on those cellular power plants. Again, the age-associated changes seen in the free-fed mice — aggregation of mitochondria into clumps and a drop in levels of ATP, the metabolic fuel produced by mitochondria — were not seen in egg cells from the aged CR females.

While the mechanisms by which caloric restriction produces its effects are still being investigated, several of the metabolic pathways involve a regulator of DNA transcription called PGC-1α, which is known to modulate genes involved in controlling mitochondrial number and function. Tilly’s team also found that egg cells from female mice lacking a functional PGC-1α gene who were allowed to free-feed through adulthood maintained the same egg cell quality as seen in the CR mice. However, combining CR with PGC-1α inactivation did not increase the effects beyond those achieved separately, which suggests that the two approaches work in a common pathway.

“While most of the work in the field of caloric restriction has been done in mice and other laboratory animals, over the past few years a number of studies have shown that several of the health benefits reported in aging mice are also seen in monkeys and perhaps in human populations that have chosen to limit their caloric intake,” says Tilly, who is a professor of obstetrics, gynecology, and reproductive biology at Harvard Medical School.

“If we find a way to safely reproduce in humans the effects we see in this study — and even though this is a mouse study, we know these age-related egg cell defects are also seen in humans — we may be able both to improve a woman’s chance of getting pregnant and, for those who do need assisted reproductive technology, to improve the quality of the eggs we use to minimize if not eliminate the age-related increase in Down syndrome and other chromosomal disorders,” he adds.

The study was supported by a National Institutes of Health MERIT award and by grants from the Henry and Vivian Rosenberg Philanthropic Fund, the Sea Breeze Foundation, and Vincent Memorial Research Funds.