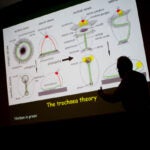 For love of the creepy, crawly

Speakers at an all-day conference at the Harvard School of Public Health (HSPH) hailed a two-year-old federal law giving the U.S. Food and Drug Administration (FDA) power to regulate cigarettes as a key opportunity to further reduce smoking’s impact on people’s health.

The conference on Wednesday (June 22) included a memorial tribute to the late U.S. Sen. Edward M. Kennedy of Massachusetts, who waged a long fight to get the FDA legislation passed. The tribute also noted the roles of other members of the Kennedy family, including President John F. Kennedy and U.S. Sen. Robert F. Kennedy, who also championed the fight against the tobacco industry.

Joseph Kennedy III, grandson of Robert Kennedy, spoke at the conference, thanking attendees both for honoring his family’s contributions and for their own vigorous activism that over the years has led to major victories in the fight against smoking. Though overall rates of smoking have declined in the United States since his grandfather declared “this is a battle that can be won” in 1967, Kennedy called on attendees to continue their efforts, saying the stakes remain high, with 400,000 Americans dying of smoking-related illnesses each year, at a cost to the economy of $96 billion annually.

The conference was held on the second anniversary of President Obama’s signing of the Family Smoking Prevention and Tobacco Control Act, and just days after the FDA exercised one of its new powers by requiring graphic warning labels on cigarette packs depicting the health ills caused by smoking.

Several speakers warned that even with its new regulatory power, the FDA faces a difficult fight against the tobacco industry, which for decades has resisted attempts to curb sales of its products, using lawsuits, lobbying in Congress, and the expenditure of billions of dollars on advertising and marketing.

HSPH Dean Julio Frenk said the legislation makes the United States the first nation to oversee tobacco through its national drug regulatory agency. As tobacco companies step up marketing their products overseas, he said, the government’s move may be copied by other countries.

Frenk said smoking is a global problem that requires a sweeping approach and shared learning among various national programs. That understanding, he said, prompted HSPH to launch its Center for Global Tobacco Control a year ago, with an emphasis on translating knowledge to policy and practice.

Gregory Connolly, director of the HSPH Center for Global Tobacco Control and professor of the practice of public health, told attendees that the conference’s aim is to help the FDA to use its new power effectively.

“The only entity in the U.S. that will suffer [as] this bill is implemented is the tobacco industry,” Connolly said. “Our job is to ensure this is done.”

The law, Connolly said, ends decades during which the tobacco industry was essentially exempt from nearly every major health and safety law and was allowed to continue to market a product that, as a later speaker described, kills one in three daily users when used as the manufacturer intended.

The 20th century was the era of the cigarette, Connolly said. The question is whether that will also be true of the 21st century. Connolly said he’d like to see the last cigarette stubbed out by a child by 2020.

Other speakers addressed a range of issues, from the legislative history of the new law to aspects of regulatory design to lessons from the regulation of cocaine and opium. Jeffrey Teitz, who served as chief counsel for policy for Sen. Edward Kennedy from 1996 to 2009, said the comfortable margins by which the law ultimately passed — 79 to 17 in the Senate and 298 to 111 in the House — masked not just the years it took to get the bill passed, but also the bitter procedural battle that ensued behind the scenes and that threatened the legislation just hours before the vote.

Teitz said Kennedy understood that 90 percent of smokers pick up the habit as children, and focused a lot of his efforts to stop cigarette and tobacco advertising aimed at the young. Each day, Teitz said, 4,000 children try their first cigarette, and 1,000 of them wind up as smokers.

Teitz said the FDA can make major inroads against smoking, and he cautioned the agency to be skeptical of industry efforts to present itself as somehow changed.

“The FDA can play a major role in breaking the cycle of addiction and premature death,” Teitz said. “The image [the tobacco industry is] trying to project that they have somehow changed cannot be further from the truth … The FDA should view these companies with profound skepticism.”

The law gives the FDA power to regulate the composition of cigarettes, to fight marketing efforts aimed at children, and to investigate unsubstantiated health claims by the industry, including those of reduced risk for particular products.

When the law was passed, Teitz said, Kennedy was too ill to attend the Senate vote. He did issue a statement, though, which Teitz quoted: “Passage of this legislation is much more than a victory for those of us who have long championed the cause. It is a life-saving act for millions of children who will be spared a lifetime of addiction and premature death.”