What makes them special 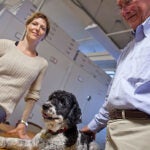 No cheeks, no problem

Solving the mysteries behind the type 1 diabetes medalists

“My parents were told I would die in my early 20s,” said one woman diagnosed with type 1 diabetes on her eighth birthday. “They decided not to tell me that until my early 50s.”

Such comments were common among the more than 100 Joslin 50-Year Medalists who gathered at Joslin Diabetes Center, a Harvard Medical School affiliate, on June 4 along with family and friends.  Sharing their stories about living with the disease for many decades, the veterans also heard updates on research about their unusual medical characteristics.

The Joslin Medal originally was given as recognition for long-term survival with type 1 diabetes, in which the body attacks its own cells that produce insulin, a hormone that lets body use the sugar found in foods for energy.

Over time, however, Joslin scientists spotted unusual and positive health trends among the 50-Year Medalists, which led to the launch of the Medalist Study in 2005.

“You’re a very special group,” Hillary Keenan, co-principal investigator for the study, told the attending medalists, family, and friends, drawn from across the United States and several other countries.

For one thing, “you can consider yourself lucky that you’re here,” joked George King, co-principal investigator, Joslin’s chief scientific officer, and professor of medicine at Harvard Medical School.

While no cure has been found for type 1 diabetes, survival rates have soared and complications have diminished over the past half century as the tools for managing the disease have become much more powerful and friendly.

But the story was different before 1961. A Joslin study in 1981 found that, among people diagnosed with the condition between 1939 and 1959, only 48 percent of women and 34 percent of men were expected to live to age 55.

Beyond their longevity, however, this intensively studied group of survivors is unusually free of many of the complications that often plague people with diabetes.

An analysis of 351 participants published in the April issue of Diabetes Care showed that 43 percent are free from advanced diabetic eye complications, 87 percent from kidney disease, 39 percent from nerve disease, and 52 percent from cardiovascular disease.

Even more dramatically, the study has firmly demonstrated that some medalists still retain cells actively producing insulin, decades after the autoimmune attack that triggers the disease has been thought to wipe out all such cells.

A study published last August demonstrated that many in this group show production of C-peptide (a marker of insulin production), blood glucose (sugar) levels that rise less after a meal than would be expected in the absence of insulin, and signs of autoimmune attack. More directly, insulin-containing cells have been found in every one of the 19 pancreases willed by 50-Year Medalists to the program, Keenan said.

One impetus for this line of inquiry came from an insight by Elizabeth Saalfeld, who attended the June meeting. After living with diabetes for almost 60 years, Saalfeld realized that her insulin requirements sometimes were so low that her body might still be making the hormone. She mentioned her observation to King in 2004. Follow-up lab analyses suggested that she was right.

The Medalist Study now draws together investigators across Joslin to analyze genetic or other factors that may be protecting this cohort. So far, the program has examined 680 individuals, with support from the Juvenile Diabetes Research Foundation and the National Institutes of Health.

“We are on the cusp of identifying protective factors for eye and kidney complications,” King declared. “We’ve made huge progress in the past year.”

Still, medalists gave a collective gasp when they heard that cases of type 1 diabetes are climbing particularly quickly in children under 6 years of age. Proud as they are of their medals, many kept saying, they want the medals to go away.