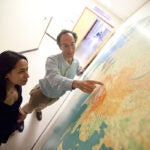 In the tomb of Egyptian King Tutankhamen, the elaborately painted walls are covered with dark brown spots that mar the face of the goddess Hathor, the silvery-coated baboons — in fact, almost every surface.

Despite almost a century of scientific investigation, the precise identity of these spots remains a mystery, but Harvard microbiologist Ralph Mitchell thinks they have a tale to tell.

Nobody knows why Tutankhamen, the famed “boy king” of the 18th Egyptian dynasty, died in his late teens. Various investigations have attributed his early demise to a head injury, an infected broken leg, malaria, sickle cell anemia, or perhaps a combination of several misfortunes.

Whatever the cause of King Tut’s death, Mitchell thinks those brown spots reveal something: that the young pharaoh was buried in an unusual hurry, before the walls of the tomb were even dry.

Like many ancient sites, Tutankhamen’s tomb suffers from peeling paint and cracking walls. In the oppressive heat and humidity, throngs of tourists stream in and out of the cave, admiring it but also potentially threatening it.

Concerned about the tomb’s preservation, the Egyptian Supreme Council of Antiquities approached the Getty Conservation Institute for help. The Getty, in turn, had questions for Mitchell.

What are the brown spots? Are visiting tourists making them worse? Most important, do they present a health hazard?

In his investigation, Mitchell, the Gordon McKay Research Professor of Applied Biology at Harvard’s School of Engineering and Applied Sciences (SEAS), combines classical microbiology with cutting-edge genomic techniques. His research team has been culturing living specimens swabbed from the walls of the tomb as well as conducting DNA sequence analyses.

Meanwhile, chemists at the Getty have been analyzing the brown marks, which have seeped into the paint and the plaster, at the molecular level.

So far, the chemists have identified melanins, which are characteristic byproducts of fungal (and sometimes bacterial) metabolism, but no living organisms have yet been matched to the spots.

“Our results indicate that the microbes that caused the spots are dead,” said Archana Vasanthakumar, a postdoctoral fellow in Mitchell’s lab. “Or, to put it in a more conservative way, ‘not active.’”

Further, analysis of photographs taken when the tomb was first opened in 1922 shows that the brown spots have not changed in the past 89 years.

While the identity of the ancient organism remains a mystery, all of this is good news for tourists and Egyptologists alike, because the evidence suggests that not only are the microbes not growing — they’re actually part of the history, offering new clues to the circumstances of the king’s death.

“King Tutankhamen died young, and we think that the tomb was prepared in a hurry,” said Mitchell. “We’re guessing that the painted wall was not dry when the tomb was sealed.”

That moisture, along with the food, the mummy, and the incense in the tomb, would have provided a bountiful environment for microbial growth, he said, until the tomb eventually dried out.

Exotic as the project may sound, investigations like this are typical of Mitchell’s research in applied microbiology.

In past years, his lab has studied the role of bacteria in the deterioration of the USS Arizona at Pearl Harbor, Hawaii, and the microorganisms living within limestone at Maya archaeological sites in southern Mexico. Nick Konkol, a former postdoctoral research associate, and Alice Dearaujo, a current research assistant, have developed rapid new ways to detect mold growing within the paper of historical manuscripts, paintings, and museum artifacts.

The field is referred to as “cultural heritage microbiology,” and Mitchell literally wrote the textbook on it.

“This type of research is typical of the interactive activity of SEAS, where modern scientific and engineering techniques are integrated to solve complex problems,” Mitchell said.

Just a few years ago, he was called down to the Smithsonian National Air and Space Museum to investigate the collection of Apollo space suits. In the heat and humidity of the museum’s Maryland storage facility, black mold was chewing through the many-layered polymers, damaging the priceless suits.

The relatively simple solution in that case was the installation of a climate control system. Unfortunately, however, there is a difference between prevention and treatment. Once a historical artifact has begun to deteriorate, the damage is usually irreversible.

Mitchell points to the example of the cathedral in Cologne, Germany. Built over the course of 632 years and listed as a UNESCO World Heritage site, the walls of the magnificent cathedral feature angels and historical figures carved out of stone.

In just the past 100 years, the angels’ faces have been eaten away by air pollution.

“I always use the analogy of cancer,” Mitchell said. “You want to get to it early enough that it isn’t doing major destruction.”

But what to do about the Egyptian tomb’s 3,000-year-old microbial problem?

The damage is already done, so Mitchell predicts that the conservators will leave the spots alone, particularly since they are unique to that site.

“This is part of the whole mystique of the tomb,” he said.