They dig the past 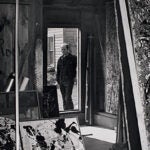 With a shovelful of sod, a Harvard Summer School archaeology class kicked off its biennial journey into Harvard’s past on Wednesday (June 29), seeking clues about early life here among traces of the Indian College, which housed the School’s first Indian students and the continent’s first printing press.

Class instructors Diana Loren, a lecturer on anthropology and associate curator at the Peabody Museum of Archaeology and Ethnology, and Christina Hodge, senior curatorial assistant at the Peabody, said this year’s dig will focus on what appears to be a foundation trench uncovered during the last dig, in 2009. They believe that the trench, which was associated with building material, marks the eastern wall of the Indian College, Harvard Yard’s first brick building.

To mark its 375th anniversary and recognize its roots as a School dedicated to serving both colonial and Native youth, Harvard this year honored one of the Indian College’s students, Joel Iacoomes, with a special degree. Iacoomes, a Wampanoag, had completed his studies in the spring of 1665, but died in a shipwreck before he could graduate. Iacoomes’ death left classmate Caleb Cheeshahteaumuck as the first and only graduate of the Indian College.

The Indian College was founded in 1655, just 19 years after Harvard itself was founded, and stood until 1698.

During a brief ceremony to open the dig, Lisa Brooks, assistant professor of history and literature and of folklore and mythology, said the Harvard campus inhabited by early Native students would have had some similarities and many differences from today. Most of the Yard’s buildings weren’t built, and cows would have been grazing nearby. Horses would have traveled the nearby streets, and breakfast might have been bread and beer. Students looking around from that same spot would have seen the College’s first brick building, heard the continent’s first printing press working inside, and perhaps seen Indian and English youth studying together.

The class, “The Archaeology of Harvard Yard,” will dig on Mondays and Wednesdays from 8:30 to 11:30 a.m. Whereas classes digging in the same area in prior years took great pains to slowly delve deeper into the Yard’s soil, Hodge said that because the area above the trench feature is mainly fill from earlier digs, this year’s class will be able to reach the trench level more quickly, allowing students to spend more time exploring the feature. Though the trench is a primary interest of the class, students are also seeking whatever artifacts they can find at that level that might illuminate what life at the time was like.

Though Summer School wraps up in August, Harvard College students will continue the work when classes resume in the fall.

Summer School Dean Donald Pfister, the Asa Gray Professor of Systematic Botany, also spoke at the ceremony and said the class is a good example of how the Summer School reaches out to the surrounding community. Not only are community members welcome to take Summer School classes, but the dig will prove something of a tourist attraction, as people passing through the Yard ask questions about what the students are doing.

Shelley Lowe, director of the Harvard University Native American Program, one of the dig’s sponsors, said the organization is excited to see what kinds of things the students find that can illuminate the history of Indians at Harvard.

“We hope that students find something really outstanding and exciting,” Lowe said.