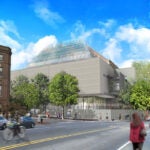 When three is also one

On a recent spring evening, a group of Harvard musicians gathered near a faraway hotel pool. Their violas and violins echoed in the warm night air, alive with the sounds of salsa.

“We got our instruments out, and the Cubans ended up improvising some salsa music, and they taught us how to dance,” said Diana Tsen ’11, a violinist with the Harvard-Radcliffe Orchestra (HRO) who helped to organize a seven-day trip to Cuba that concluded earlier this month.

The impromptu performance followed a formal concert earlier in the evening in Santa Clara, where members of the Orquesta Sinfónica de Santa Clara joined the HRO to perform composer George Gershwin’s “Cuban Overture,” a piece inspired by his trip to Havana in 1932, and filled with Caribbean themes.

The HRO tours every four years. But this trip was more than just a relaxing getaway interspersed with musical interludes. It was an important cultural exchange, and statement.

“One thing we all felt very strongly about was that this tour be musically and culturally significant,” said Tsen, adding that the group wanted to visit a challenging locale that was also “musically and intellectually stimulating.”

“I thought that there are places in the world where … it is meaningful to go with an exceptional group of young people representing an exceptional institution. [In a place like Cuba] I really think you can be an excellent ambassador for the United States.”

For decades, travel to Cuba from the United States has been strictly controlled. But in 2009 President Barack Obama eased travel restrictions on family members wishing to visit and send remittances to the country. Earlier this year, the Obama administration further relaxed travel rules, allowing religious, academic, and cultural groups to travel to the communist-ruled island nation.

Music’s universality is helping to thaw icy relations between the two countries.

Problems with timing and trouble finding a big enough plane forced the New York Philharmonic to cancel earlier plans to visit Cuba. But last year jazz legend Wynton Marsalis and his Jazz at Lincoln Center Orchestra made the trip for a series of concerts and performances.

The visit by the Harvard students, the first U.S. university orchestra to play in Cuba since the embargo began, continued in that vein. Crowds filled the theaters to capacity, eager to hear the students perform both on their own and alongside Cuban musicians. Cortese was mobbed with well-wishers after each show, and flooded with requests for interviews by local media outlets.

In the streets, said Tsen, the Cubans were warm and welcoming, saying, ‘The American people and the Cuban people, we like each other and we get along. People aren’t politics, so we are friends even though our governments don’t get along.”

Rehearsals were a multicultural mix of Cubans and Americans directed by an Italian (Cortese) who addressed them in English and Spanish, and occasionally in German. Proud of their musical roots, the Cuban musicians weren’t shy about putting their own spin on Gershwin. During one rehearsal, they politely insisted that the rhythm of the piece be changed to reflect their musical heritage more accurately.

“They were saying that Gershwin got the rhythm wrong,” said Cortese, who happily obliged and altered the beat.

“You are left with these people who are very excited and very spirited about this genre of music but they have no access to these resources. and so we thought it would be really interesting for both parties to engage in this cultural exchange.”

In Cuba, where music supplies are limited, even basic instrument repairs can prove challenging. Fortunately, the HRO arrived with a luthier in tow, tasked with keeping the group’s 12 rented cellos and seven double basses in working order. In addition to attending to the HRO students, she spent much of her time fixing the Cubans’ instruments.

“They lack even the simplest things,” said Tsen, adding, “It was really cool to see they could achieve such a high level despite not having those resources that we take for granted.”

The trip culminated with a concert in the Gran Teatro of Havana, where the group collaborated with the National Chorus of Cuba, the National Opera de la Calle, and soloists from Havana’s Superior Institute of the Arts on Ludwig van Beethoven’s iconic “Ninth Symphony.” Performing Beethoven’s masterwork, with its theme of universal brotherhood, conveyed a vital message, said Cortese.

“It’s the perfect piece when you have some kind of statement about peace and friendship of peoples. … I think that an American orchestra that goes there and plays Beethoven’s ‘Ninth’ has particular meaning.”

The HRO also held music workshops with young musicians in Cienfuegos and Havana. At the Escuela de Arte Benny Moré in Cienfuegos, HRO members gave master classes to elementary-level students. At the Conservatorio Amadeo Roldán in Havana, they rehearsed Beethoven’s “Ninth” with a secondary-level orchestra.

Cortese said he hopes to schedule similar tours in the future.

“We can break barriers through music.”