No cheeks, no problem 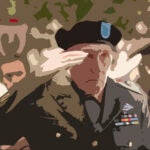 VHA vs. Medicare: And the winner is …

A Harvard biologist has come to the defense of dogs, refuting scientific claims that canines’ slobbery drinking results from unsophisticated ladling with their tongues, showing that they use the same subtle combination of physical forces and anatomy used by their archenemies — cats.

Alfred W. Crompton, the Fisher Professor of Natural History Emeritus, his longtime assistant Catherine Musinsky, and his faithful Portuguese water dog, Matilda, joined forces after a 2010 paper written by a team led by Massachusetts Institute of Technology (MIT) scientists described in great detail how cats use adhesion and inertia to literally pull columns of water from a dish into their open mouths before closing their jaws to trap the water.

The MIT paper, published in the journal Science, said that cats curl the tips of their tongues backward, forming a large flat area that comes into contact with the surface of the liquid. The water adheres to the tongue as the cat draws it back into its mouth, pulling a column of liquid up from the surface. They bite the top of the column off with their jaws before the counteracting force of gravity can send it splashing back into the bowl.

Crompton, who works on neuromuscular control of animal feeding and has conducted studies on how opossums drink, praised the paper when shown its findings by authors Pedro Reis and Roman Stocker. Cats’ drinking techniques, Crompton said, are quite different from the strategies employed by opossums, who extend and withdraw their tongues more horizontally, almost in a shoveling motion, changing the shape of the tip to trap water.

While Crompton praised the work on cats’ drinking, a mention in the paper that the technique was different from dogs’ supposed strategy of scooping water with their tongues didn’t sound right and set Crompton to work.

Needing a canine subject, he employed 8-year-old Matilda, who accompanies him to work at Harvard’s Museum of Comparative Zoology each day. Though it was the first time Crompton experimented on Matilda, she took to it like a champ, lapping up broth and milk in front of cameras without coaxing.

Using high-speed photography and high-speed X-rays, Crompton filmed Matilda lapping up dark-colored beef broth and barium-laced milk to detect what happens with the liquid inside the mouth.

“When the video showed the column of liquid being drawn up … we thought, ‘Let’s hear it for the dogs,’” Crompton said.

Crompton said the cats versus dogs angle was a bit of good fun and gave credit to the MIT team for their documentation of the lapping technique. Besides clarifying canine drinking behavior, Crompton said, the most significant finding of his paper, published in Biology Letters in March, came from the high-speed X-rays showing what happens to the liquid once it is inside the mouth and why gravity doesn’t pull it back out when a dog extends its tongue for another drink.

The X-rays show that dogs trap liquid in grooves on the roofs of their mouths, holding it there with the backs of their tongues even as they extend their tongues for a second drink. The tongues work as a conveyor belt, drawing up water into their mouths, trapping it against the roof of their mouths, and then pushing it back a bit further with each lap. The camera showed that it takes three or more cycles to swallow an allotment of liquid.

Though cats and dogs drink in the same fashion, the original misunderstanding may have come from the fact that while cats’ tongues come into contact with just the surface of the liquid, dogs’ tongues plunge in, breaking the surface. This action not only creates a mess, it also pools liquid on the back side of the tongue as the animal draws it up, almost as if it were forming a cup. Closer examination of the video shows, however, that that liquid is lost as the tongue is drawn up, Crompton said.

“That’s why they make such a mess,” he said.

Together, the cats and dogs studies help illuminate how animals solve the problem of pulling water against gravity into their mouths, Crompton said. Animals that have cheeks, like humans, horses, and pigs, can create suction with their tongues, drawing water in. But cats, dogs, and other carnivores that have to open their mouths wide to catch their prey don’t have cheeks and have to find other solutions, Crompton said.

“If you’re a carnivore like an opossum, cat, or dog, life depends on opening your mouth wide,” Crompton said. “It’s an interesting system.”