It doesn’t add up 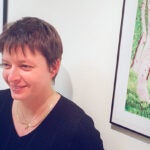 In evolution, total appears less than the sum of the parts

An important new finding by Harvard researchers indicates that cellular mutations responsible for an organism’s successful adaptation do not, when combined over time, provide as much benefit as they would individually be expected to provide.

The study from the laboratory of Christopher Marx, an associate professor in the Department of Organismic and Evolutionary Biology (OEB), is one of two investigations with identical approaches and equivalent results that are being published in Friday’s (June 3) issue  of the journal Science. The other paper comes from the lab of Tim Cooper, an assistant professor in the University of Houston’s Department of Biology and Biochemistry.

Hsin-Hung Chou, a postdoctoral fellow in Marx’s lab, is the first author on the Harvard paper.

Although the Harvard and Houston groups each studied a different bacterium that evolved in different conditions, the patterns they uncovered were the same: The more fit the strain was before introducing the beneficial mutation in question, the less further improvement was conferred.

Marx and Cooper, who are both colleagues and friends, submitted their work simultaneously to Science this past February, asking that the journal consider their manuscripts jointly. “We independently came to the same remarkable punch line with completely different model systems. We thus feel that this congruence of results adds substantial strength to the suggestion of generality from our findings,” they wrote in their joint submission letter to Science. The two research groups posit that their findings help explain the “deceleration of population adaptation” over time.

Although the papers of Marx and Cooper came to remarkably similar conclusions, they contrasted strongly with analogous studies looking at mutational combinations within single proteins. For example, an earlier paper from the laboratory of Daniel Hartl, Higgins Professor of Biology in OEB, showed that mutations within the enzyme that provides resistance to penicillins interacted with each other violently. The same mutation could be tremendously beneficial if partnered with some mutations, and quite deleterious when grouped with others. These interactions would greatly constrict which paths for improvement can be driven by natural selection.

In their letter to Science, Marx and Cooper wrote that “our papers are critical because they paint … [a] picture that suggests that adaptation involving the wider context of whole genome networks may behave entirely differently than adaptation of proteins.  Interactions between beneficial mutations are common but seldom impose hard limits on the mutational transitions that can be selected. This result has broad implications for understanding the trends and causes of fitness landscapes.

“Any finding in experimental evolution establishes rigorously what can happen; when results are repeated across systems it suggests that this might actually be what does happen in nature.  Indeed, this simple effect of mutation interactions on the form of the fitness landscape may provide a new ‘predictability’ to evolutionary biology,” they wrote.

The editors of Science apparently agreed with Marx and Cooper, and not only are the papers being published in the same issue of the journal, Science is also publishing a commentary on the papers titled “Evolutionary Sum Is Less Than Its Parts.”

Earlier studies of evolutionary mutations in individual proteins, and preliminary studies done in Marx’s lab had shown that mutation was order dependent, that the order of changes over time had a controlling effect upon the end result. “But our work and the other new work being published shows a different picture throughout the cell,” Marx said. “We found that all positive mutations are always good, but the amount that they’re good becomes less and less over generations.”

One of the exciting things about doing this kind of science, Marx said, is that it demonstrates that evolution is something that can be studied with microbes in the laboratory, and on the timeline of a graduate career. This allows questions of broad interest in natural systems to be addressed experimentally.

“Our ultimate goal,” Marx said, “is to find out why this happens. We need to be able to understand these interactions in order ultimately to be able to take advantage of them.”