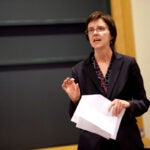 Henry Louis Gates Jr., the Alphonse Fletcher University Professor and the director of the W.E.B. Du Bois Institute for African and African American Research at Harvard University, was honored with the 2011 Media Bridge-Builder Award from the Tanenbaum Center for Interreligious Understanding. One of the U.S.’s pre-eminent scholars of African-American history, Gates joins the august company of Gwen Ifill, Ann Curry, and Brian Williams, among others. Gates received the award on June 15 in New York City, where he also delivered the Tanenbaum Memorial Lecture, given annually by a prominent individual whose work in the public arena inspires broad audiences to work for greater acceptance among people of different religions and cultures.

In addition to his work with students at Harvard, Gates is the author of 14 books and has most recently published “Faces of America: How 12 Extraordinary People Discovered Their Pasts and Tradition” and “The Black Atlantic: Critical Theory in the African Diaspora.”