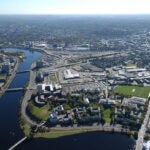 Like many men, Gary Goodwin admits he’s not the greatest at talking about his feelings. He describes his relationship with Eileen Snow — his co-worker of 11 years — like that of “Greg and Marcia Brady.”

“We fought like cats and dogs sometimes,” he said.

But months ago, when Snow was diagnosed with breast cancer, Goodwin began showing his feelings through action. Goodwin, a building manager for the Biological Laboratories and the Biological Research Infrastructure, was sitting in his driveway one morning when he knew he would have to step out of his comfort zone to support his co-worker.

So he approached Susan Foster, executive director of the Department of Molecular and Cellular Biology (MCB), and asked for permission to start Team Eileen. The idea was modest, at first. Goodwin corralled other building operations staffers to join him in raising awareness for Snow’s illness, and signed up to participate in a 40-mile walk against breast cancer.

But when Renate Hellmiss, the MCB’s senior scientific designer, got wind of Team Eileen’s plans, she immediately joined — and then pulled Goodwin aside. “She told me I was in way over my head,” he recalled. Hellmiss, who has been an annual runner with the Dana-Farber Marathon Challenge team that participates in the Boston Marathon for the Dana-Farber Cancer Institute, knew about fundraising, and she knew about the Susan G. Komen for the Cure’s annual walk, Race for the Cure.

“The two of us have talked more in the last three months than in the past 12 years,” joked Goodwin. “I’m more of a pusher, but Renate steers the boat.”

To raise money, the MCB hosted a bake sale, which turned up more than $3,000. Soon after, said Goodwin, Team Eileen’s progress began to snowball. The team has grown to 16 (not exclusive to the Harvard community) and has raised more than $35,000 — but has a goal of $100,000 before the three-day event begins on July 22.

Sponsors have donated bright, carnation-pink shirts emblazoned with “Team Eileen,” which look kind of funny on a group of rough-and-tumble guys. But Goodwin wears the shirt with pride.

“She’s the face of our office,” said Goodwin of Snow, who has undergone two surgeries and will start chemotherapy soon.

Now Team Eileen is gearing up for its biggest fundraising event yet, a June 24 art sale dubbed Art @ 52 Oxford.

With a budget of zero dollars, the team is using University space, the generosity of local vendors and volunteers, and local artists who have agreed to donate half of their proceeds toward Team Eileen. The organizers are raffling off a scooter, thanks to another sponsor. Snow is planning to attend.

“No one ever talks about breast cancer, but it affects so many people,” said Goodwin. “I have two daughters; I never want them to have to deal with this.”

Goodwin said his proudest moment was telling Snow about Team Eileen’s formation, and its ongoing plans. “I originally wanted to do it as a secret, but I had to tell her,” he said. “The day I told her, she cried.”

And Goodwin even cried too — “a little.”