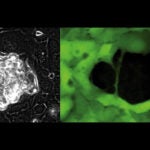 Mitochondria are battery-pack organelles, or cell units with specific functions, that fuel the energy of almost every living cell, and they have an insatiable appetite for calcium. Whether in a dish or a living organism, the mitochondria of most organisms eagerly absorb this chemical compound. Because calcium levels link to many essential biological processes — not to mention conditions such as neurological disease and diabetes — scientists have been working for half a century to identify the molecular pathway that enables these processes.

After decades of failed efforts that relied on classic biochemistry and membrane protein purification, Vamsi Mootha, a Harvard Medical School (HMS) associate professor of systems biology, and his colleagues have discovered, through a combination of digital database mining and laboratory assays, the linchpin protein that drives mitochondria’s calcium machinery.

“This channel has been studied extensively using physiology and biophysics, yet its molecular identity has remained elusive,” said Mootha, who also has appointments at Massachusetts General Hospital (MGH) and at the Broad Institute. “But thanks to the Human Genome Project, freely downloadable genomic databases, and a few tricks, we were able to get to the bottom of it.”

The results build on work that Mootha and his group have completed over the past decade. In 2008, he and his team published a near-comprehensive protein inventory, or proteome, of human and mouse mitochondria. This inventory, called MitoCarta, consisted of just more than 1,000 proteins, most of which had no known function.

In a September 2010 paper, Mootha’s group described using the MitoCarta inventory to identify the first protein specifically required for mitochondrial calcium uptake. Their strategy was simple. They knew that mitochondria from humans and Trypanosomes (a parasitical organism), but not baker’s yeast, are capable of absorbing large amounts of calcium. By simply overlapping the mitochondrial protein profiles of these three organisms, the group could spotlight roughly 50 proteins out of the 1,000 that might be involved with calcium channeling. They found that one protein, which they dubbed MICU1, is essential for calcium uptake.

“That was a significant advance for the field,” said Mootha. “We showed that MICU1 was required for calcium uptake. But because it did not span the membrane, we doubted it was the central component of the channel. But what it provided us with was live bait to then go and find the bigger fish.”

Traditionally, researchers used standard laboratory methods for such a fishing exhibition, such as attaching biochemical hooks to the protein, casting it into the cell’s cytoplasm, then reeling it back in the hope that another, related protein will have bitten. But MICU1’s function as a regulator of a membrane channel made this technically prohibitive. Instead, graduate student Joshua Baughman and postdoctoral researcher Fabiana Perocchi went fishing in publicly available genomic databases.

With MICU1 as their point of reference, they scoured databases that measure whole genome RNA and protein expression, as well as an additional database containing genomic information for 500 species. They looked for proteins whose activity profile mirrored MICU1’s. A single anonymous protein with no known function stood out. The researchers named it MCU, short for “mitochondrial calcium uniporter.”

To confirm that MCU is central to mitochondria’s calcium absorption, the team collaborated with Alnylam Pharmaceuticals, a company that leverages a laboratory tool called RNAi in order to selectively knock out genes in both cells and live animals. Using one of the company’s platforms, the researchers deactivated MCU in the livers of mice. While the mice displayed no immediate reaction, the mitochondria in their liver tissue lost the capacity to absorb calcium.

This basic science finding may prove relevant in certain human diseases. “We’ve known for decades now that neurons in the brains of people suffering from neurodegenerative disease are often marked by mitochondrial calcium overload,” said Mootha, an authority on rare mitochondrial diseases who sees patients at MGH when he’s not in the lab.

“We also know that the secretion of many hormones, like insulin, are triggered by calcium spikes in the cell’s cytoplasm. By clearing cytosolic calcium, mitochondria can shape these signals. Scientists studying the nexus of energy metabolism and cellular signaling will be particularly interested in MICU1 and MCU. It’s still very early, but they could prove to be valuable drug targets for a variety of diseases — ranging from ischemic injury [where blood supply is lacking] and neurodegeneration to diabetes.”

The research was funded by the National Institutes of Health.