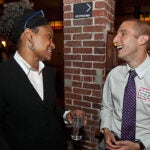 A gathering of goals

Named chair of Commission on a High Performance Health System

David Blumenthal, the Samuel O. Thier Professor of Medicine at Harvard Medical School, has been named chairman of the Commonwealth Fund Commission on a High Performance Health System.

Blumenthal, who is the former national coordinator for Health Information Technology (IT), is also currently a professor of health care policy at Harvard Medical School and at Massachusetts General Hospital/Partners Healthcare System. He succeeds James J. Mongan, founding chairman of the commission, who passed away on May 3.

Blumenthal was chosen by President Obama to serve as national coordinator in 2009, with the charge to build an interoperable, private, and secure nationwide health information system and to support the widespread, meaningful use of health IT. He succeeded in putting in place one of the largest publicly funded infrastructure investments the nation has ever made in such a short time period, in health care or any other field.

“We are very fortunate to have Dr. Blumenthal as chairman of the commission during this critical period of implementation of the Affordable Care Act,” said James R. Tallon Jr., chairman of the Commonwealth Fund. “The commission will be well served by his deep understanding of the challenges and opportunities we face as we move the U.S. toward a high-performing health care system that will help set our nation on the path to a sound economic future.”

The commission is charged with developing recommendations promoting a high-performing health system that provides all Americans with affordable access to high-quality, safe care while maximizing efficiency in its delivery and administration. In a series of reports leading up to and during the debate and passage of the Affordable Care Act, the commission made the case for comprehensive reform of the U.S. health care system.

Professor Michael Chernew of the Department of Health Care Policy at Harvard Medical School was also named a member of the commission.