Art and the immigrants 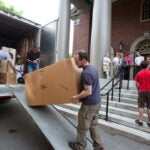 When she was a girl in Brazil, Angelica Silva made a regular, cherished detour on her way to school, stopping at a local museum to wonder at the treasures inside.

Last week Silva, now a Harvard custodial worker, was back in a space filled with beautiful artworks.

“For me, it’s amazing,” said Silva, who looked like a kid in a candy store during a recent outing to the Harvard Art Museums/Arthur M. Sackler Museum. “I loved the museums since I was a little kid.”

It was Silva’s first visit, but it won’t be her last. She is participating in an outreach program created by museum officials that helps immigrants to enjoy Harvard’s collections, develop their English skills, and connect to important lessons in history and democracy.

“We wanted to invite people into a mainstream cultural institution that they might not seek out on their own,” said Ray Williams, the museums’ director of education, who created the program called “Engaging New Americans: Explorations in Art, Self, and Our Democratic Heritage.”

In 2009, Williams and senior museum educator Judy Murray developed a pilot for the program in collaboration with the Massachusetts Alliance of Portuguese Speakers and its 12-week citizenship course. The outline included visits to the museum focused on art from colonial and revolutionary times, the 19th century with an emphasis on Western expansion, and 20th century art.

“We realized the museum might have works of art that could make American history more memorable, and that we might enrich the process of preparing to become an American,” said Williams.

Like latter-day explorers, the many first-time visitors enter the galleries, using the paintings and sculptures as springboards for conversations in English about democratic values.

A provocative altarpiece from the Italian Renaissance depicting Saint Francis of Assisi receiving the stigmata inspires a discussion about Catholicism. Other works in the museum shine a light on religious traditions. Collectively, they help students explore the notion of the freedom of religion guaranteed by the First Amendment to the Constitution.

“The works of art lead naturally to conversations about the democratic freedoms we enjoy,” said Williams.

Last fall, Williams hired Maria Schaedler-Luera as a part-time community educator. Drawing on her theatrical background, she incorporates active teaching techniques into the program. The Brazilian native, who has a master’s in intercultural relations, likes to gather students in front of the museum’s Daniel Chester French bronze sculpture of a seated Abraham Lincoln. There she asks them to create a frozen tableau portraying the Emancipation Proclamation.

“Living art and responding with our body,” Schaedler-Luera said, leads to a powerful learning experience.

After studying a painting together, Schaedler-Luera and Williams will ask the students what it means to them, what they observed, or how it relates to their own experience as an immigrant. In reacting to the art, they practice their English skills. Sometimes they write a poem together about an artwork, with each student contributing a line, or they read a brief play, drafted by Williams, that relates to painting or sculpture.

“It’s about navigating the museum environment, learning how to look closely at a work of art, building on each other’s ideas, and using English to express your thoughts, feelings, and opinions,” he said.

With a grant from the National Endowment for the Arts, Williams and his team expanded the program last year to include more than 30 teaching gallery visits and a family day, as well as produced an upcoming sourcebook that will include questions about featured works of art, activities to develop English skills, and information about American history and government.

To ensure accessibility, Williams also used the funding to assist with transportation costs, extra museum staffing after hours when most of the visits took place, and  meals for those participating in the program. Today, the project serves a number of community organizations and partners closely with Harvard’s Bridge to Learning and Literacy program.

Together, they explored the subject matter and nuance of a moody, richly textured painting: Claude Monet’s “The Gare Saint-Lazare: Arrival of a Train.” Next, the students chose an artwork that they felt related to the concepts of change and transition and discussed their selection. Finally, they read through a brief play by Williams that was based on the evocative work “Pan and Pysche” by 19th century British Artist Sir Edward Burne-Jones.

“I am always just thinking about how wonderful the museum is as a resource and how it can really speak to people in so many different ways,” said Williams, who hopes the program can serve as a template for other museums interested in expanding their community outreach.

For John Antonellis, a lead instructor at the Bridge program who has accompanied two of his classes to the museum, the new experiences and the respect that the program offers his students are invaluable.

“For a lot of students, it’s their first time ever in an art museum. So it’s not part of their routine, and it raises their awareness to a whole new way of seeing the world,” Antonellis said. “It often brings out sides of their personality not evident in a classroom setting. At times, they are the teachers sharing their observations and insights informed by their particular cultural viewpoint.”