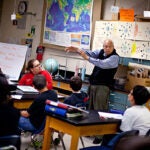 A school telescope, through the Internet

A researcher at the Harvard-Smithsonian Center for Astrophysics believes that a new kind of supernova is at work in recent observations of bright but short-lasting stellar explosions that don’t appear to fit known categories.

Hagai Perets began working on the problem after coming across a description of a 2002 supernova, discovered by University of California, Berkeley, researchers, whose description didn’t seem to fit into known categories. Instead of forgetting about it, he dove into past literature, looking for similar supernovas with unexplained characteristics. He found two, from 1885 and 1939.

He eventually tracked down the spectrum of the 1939 supernova on an old photographic glass plate he obtained from the Carnegie Observatories. Spectrums are important because the light coming from stars varies depending on the elements present. By examining spectrums, astronomers can tell what a star is made of and compare that with the composition of others.

After examining all the information that could be gleaned from the older observations and comparing it with the newer data, Perets said these stellar death throes are different from known supernovas in several ways. Like ordinary supernovas, they can briefly become the brightest objects in the sky, but they are more short-lived, waxing and waning in a matter of days rather than weeks, as with more typical supernova. They also eject far less material in their explosions and don’t seem to be powered by known processes.

Supernovas are among the most spectacular events in the universe, marking one way that stars end their lives. They can briefly become so bright that they outshine their entire home galaxies. They’re important for another reason as well. Because stars are fueled by nuclear fusion, in which smaller, lighter elements fuse to form heavier elements, they become factories in which heavier elements such as carbon, oxygen, and iron are created. The explosions that destroy stars create even heavier elements and scatter them over large distances to places, including Earth, where they eventually can be used by living things.

Perets said that these new supernovas may result from the explosion of a kind of star called a white dwarf and that such a blast may involve only the star’s upper layers. Because white dwarf stars are smaller and less dense than larger ones, these new explosions may prove to be a source for intermediate elements.

“Maybe it produces a large fraction of the calcium in the universe,” Perets said. “Probably other intermediate elements are produced in higher quantities.”

Researchers at the California Institute of Technology have already uncovered another example of this type of star, called SN 2010X. Perets said more may be found now that astronomers know how to look for them, producing additional information that may help solve the mystery.

“We’re going to know more about these in the next few years,” Perets said. “It’s going to be a puzzle for theoreticians.”