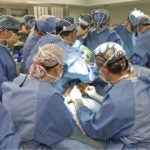 It sounds like something out of a comic book or a science fiction movie — a living laser — but that is exactly what two investigators at the Wellman Center for Photomedicine at Harvard-affiliated Massachusetts General Hospital (MGH) have developed.  In a report that will appear in the journal Nature Photonics and is receiving advance online release, Wellman researchers Malte Gather and Seok-Hyun Yun describe how a single cell genetically engineered to express green fluorescent protein (GFP) can be used to amplify the light particles called photons into nanosecond-long pulses of laser light.

“Since they were first developed some 50 years ago, lasers have used synthetic materials such as crystals, dyes, and purified gases as optical gain media, within which photon pulses are amplified as they bounce back and forth between two mirrors,” says Yun, corresponding author of the report and an associate professor of dermatology at Harvard Medical School (HMS).  “Ours is the first report of a successful biological laser based on a single, living cell.”

Adds Gather, a research fellow at HMS and the paper’s lead author, “Part of the motivation of this project was basic scientific curiosity. In addition to realizing that biological substances had not played a major role in lasers, we wondered whether there was a fundamental reason why laser light, as far as we know, does not occur in nature or if we could find a way to achieve lasing in biological substances or living organisms.”

The investigators chose GFP for their exploration of those questions because the protein — originally found in a species of jellyfish — can be induced to emit light without the application of additional enzymes.  Its properties are well understood, and there are established techniques to genetically program many organisms to express GFP. To determine the protein’s potential for generating laser light, the researcher first assembled a device consisting of an inch-long cylinder, with mirrors at each end, filled with a solution of GFP in water. After first confirming that the GFP solution could amplify input energy into brief pulses of laser light, the researchers estimated the concentration of GFP required to produce the laser effect.

Using that information, their next step was to develop a line of mammalian cells expressing GFP at the required levels.  The cellular laser was assembled by placing a single GFP-expressing cell — with a diameter from 15 to 20 millionths of a meter — in a microcavity consisting of two highly reflective mirrors spaced 20 millionths of a meter apart.  Not only did the cell-based device produce pulses of laser light as in the experiment with the GFP solution, the researchers also found that the spherical shape of the cell itself acted as a lens, refocusing the light and inducing emission of laser light at lower energy levels than required for the solution-based device.  The cells used in the device survived the lasing process and were able to continue producing hundreds of pulses of laser light.

“While the individual laser pulses last for only a few nanoseconds, they are bright enough to be readily detected and appear to carry very useful information that may give us new ways to analyze the properties of large numbers of cells almost instantaneously,” says Yun.  “And the ability to generate laser light from a biocompatible source placed inside a patient could be useful for photodynamic therapies, in which drugs are activated by the application of light, or novel forms of imaging.”

Gather adds, “One of our long-term goals will be finding ways to bring optical communications and computing, currently done with inanimate electronic devices, into the realm of biotechnology.  That could be particularly useful in projects requiring the interfacing of electronics with biological organisms.  We also hope to be able to implant a structure equivalent to the mirrored chamber right into a cell, which would be the next milestone in this research.”