A gathering of goals 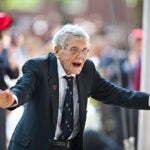 The way we were

The mission statement, endorsing “advocacy on behalf of the black community of Harvard University and its affiliates (and) providing a means of communications, interaction, and counseling,” may sound simple, but the work of the Association of Black Faculty, Administrators and Fellows (ABFAF) is anything but.

“For minorities on campus, the problems we confront can sometimes seem insurmountable.  Many may think there is no one who has experienced some of the problems they have to deal with.  Affinity groups can provide comfort and support,” said Robert P. Mitchell, assistant dean for diversity relations and communications in the Faculty of Arts and Sciences, and co-chair of ABFAF.

Established in 1993, ABFAF is the oldest of the minority affinity groups at Harvard.   But there is a growing community of support groups, especially minority affinity groups, on campus.  The LGBT Faculty and Staff Committee was officially established in 2006.  The Association of Harvard Latino Faculty and Staff (AHLFS) came along in 2008, and the Harvard Association of Asian and Asian American Faculty and Administrators (HAAAAFA) started in 2010.

“Affinity groups play vitally important roles in promoting community and engaging in advocacy,” said Timothy Patrick McCarthy, lecturer on history and literature in the Faculty of Arts and Sciences and co-chair of the LGBT group.  “For example,” he said, “our association’s goals are to increase visibility and community among LGBT faculty, staff, and administrators, and to advance a stronger voice in helping to ensure that LGBT employees are recognized and treated as full and equal partners in the Harvard community.  I suspect all the affinity groups share these general goals.”

Dale Trevino, director of diversity programs in the Harvard School of Public Health and co-chair of the Latino association, agreed.  “Similar to what other affinity groups do for their communities, we are dedicated to articulating, supporting, and promoting the needs and goals of the Latino community at Harvard.  Our aim is to increase the presence of Latino faculty and staff by assisting in the recruitment, retention, and promotion of them.  We want to highlight the scholarly and administrative achievements of Latino faculty, staff, and fellows, and create professional and social networking opportunities.”

So, how do these groups go about pursuing their missions?  What have they been up to lately?  Similar to some of the ABFAF activities mentioned, the minority affinity groups have been working with the University and individual School administrations to increase the numbers of minorities and improve the campus climate for them. McCarthy pointed out that the LGBT group advocated for the inclusion of gender identity in the University’s nondiscrimination policy.  It was added in 2006.  “We have worked with the Office of Human Resources to mitigate tax penalties for same-sex married partners and registered domestic partnerships. We have worked with University Health Services to secure more equitable health care coverage for transgender employees, especially as it relates to sex-reassignment surgery.”

“In its short existence, AHLFS has developed into a major resource for Harvard Latinos seeking to create a sense of community,” Trevino said.  “We co-hosted two annual welcome events, sponsored the Peabody Museum’s El Dia de los Muertos event in 2009, and volunteered in 2010, held a fiesta event for general membership, hosted an immigration forum, and engaged members via several membership meetings.”

Loc Truong, assistant director of the Harvard Foundation, co-chair of HAAAAFA, and a member of the LGBT committee, added, “One of the very significantroles affinity groups play in the lives of people of color at the University is giving them a community of people who look like them, a community that can make the transition into Harvard easier for new arrivals, and provide a social and political network for those who are already here.”

Seeing that the affinity groups have so many goals and objectives in common, Mitchell invited the chairs of the four groups and the leadership of the Harvard University Native American Program (HUNAP) to form an association.  The association has met a few times to discuss issues and plan events.  In February 2010, for the first time, the four minority affinity groups and HUNAP came together to host an event.  It was a reception to welcome Lisa M. Coleman, the new chief diversity officer and special assistant to the president.

“We all felt strongly that the chief diversity officer could play a pivotal role in the success of minority affinity groups, and that we should develop a strong relationship with her office.  In addition to the reception to welcome her, we have met with her to discuss a working relationship,” Mitchell said.

“We see ourselves as valuable assets to you and your office. We know that in your capacity as chief diversity officer and special assistant to the president, you are working hard to create an environment that is welcome, open and comfortable for all people.  We are eager to help,” the leaders of the affinity groups said in a letter to Coleman.  The letter went on to say, “We write to you as leaders of four Harvard affinity groups … to formally request … a relationship with your office that will enable our organizations to be more effective in serving the Harvard community.”

In response, Coleman said, “The Office of the Assistant to the President (OAP) looks forward to working with the affinity groups.”  She added, “Diversity and inclusion are part of the fabric of excellence in our learning and working environments, and we welcome the opportunity to learn from the vast and varied constituencies across the Harvard community. Thank you for your commitment to making Harvard a welcoming place for all.”