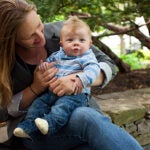 Baby, it’s been a wild ride

When time expired at Founders Field in Pittsburgh on May 1, the USA Rugby 2011 Women’s Division II College Championship belonged to the Radcliffe Rugby Football Club (RRFC). Players flooded onto the pitch in the raw weather to celebrate their upset victory over Notre Dame. Many wept as they formed a scrum of joy and embraced their teammates three or four at a time.

“We ran together shouting, crying, hugging,” says Evan Hoese ’11, most valuable player of the championship tournament. “There was so much emotion on the field. We just wanted to be together.”

Most observers probably wouldn’t have predicted such amazing success for a team whose future seemed uncertain only a few years ago. As a Harvard club sport, RRFC faced the perennial challenge of fundraising, made more difficult because of the recession. The team was also responsible for its own logistics and transportation to places as far flung as Kissimmee, Fla., and Randall’s Island, N.Y. Coach Bryan Hamlin says that recruitment was a concern when he came on board, but the players’ toughness and perseverance allowed them overcome the obstacles and build a thriving program.

“When I first began coaching this team, the numbers were very bad and there was a chance the club would fold,” says Hamlin. “We worked hard and soon participation picked up. Now we have a strong program and we are heading into the Division I Ivy League conference, ready to face the challenges that will be presented to us.”

As things stabilized, the team started winning. RRFC qualified for the 2011 national championship tournament on April 3 after beating a tough Boston University squad to which it had lost earlier in the season. Even then, the program got little respect from tournament organizers. Radcliffe drew a low seed and, thus, an early round match with one of the best teams in the country: the Norwich University Cadets, who had beaten the Harvard women earlier in the year. Oddly enough, it was this loss that convinced Hamlin his team could contend for a national title, he said.

“At that time, Norwich was the No. 1 team in the country,” he says. “Although we lost the game, we had the more skilled team; we just didn’t have the fitness. It was a close game but Norwich ran away with it in the final 15 minutes. From that moment I knew we had the potential to win a national championship.”

The team was in top condition for its tournament match with Norwich in mid-April. Trailing at halftime, Radcliffe rallied and pulled away for a 22-7 win. Next up was a semifinal game in Pittsburgh with Western Washington, another top-ranked school. Again, the fitness and stifling defense of the Harvard women were the difference as they trounced their opponent, 32-14.

“Western Washington proved to be a very worthy adversary,” says Megan Verlage ’13. “They stayed neck and neck with us the majority of the game, but broke because we kept them under constant pressure until the very end.”

The final test came against Notre Dame, a physically imposing team ranked No. 3 in the country. The Radcliffe ruggers were relaxed and confident. Hoese says that she visualized the team’s success for days before the match with Notre Dame and couldn’t wait to get on the field.

“All I could think about was the championship,” she says. “I imagined breaking through the line, knocking the other team back, big hits, and a wall of defense. I was so excited and also proud of the upcoming game and how far we’d come. I felt calm. I knew we could win.”

At first, Radcliffe had trouble shutting the Irish down and the game stayed close. The Cliffies kept the pressure on, moving Notre Dame around the field. In the final 20 minutes, the Radcliffe women upped the intensity on their exhausted opponents, whose defense could not hold. After a final scrum, RRFC claimed a 22-10 win and its first national championship since it won the Division I title in 1998.

“We play our best rugby in the last 20 minutes of a match,” says Hamlin. “At no point did I think we were going to lose that game. The team executed our plan perfectly.”

Nicole Poteat ’11 says that the championship showed her that she could accomplish anything with the help of teammates who share a common goal and a commitment to one another.

“The momentum we had this year made us an unstoppable force,” she says. “Every time I thought that force might be meeting an immovable object — like in the Norwich game, or when we played Notre Dame in the finals — I quickly remembered that for us, there was no such thing. This came from how cohesive we were as a unit on and off the field. We know the lengths we would go to for each other and that has made us fearless.”