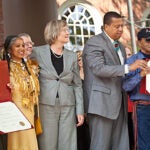 Class of ’61 celebrates 50th reunion with memories and musings

They were in college during the presidential election of John F. Kennedy, a man they considered one of their own. The Metropolitan Transit Authority car barns stood where a school in his name would be built. The future John F. Kennedy Street still went by the name Boylston.

It was a time when the Loeb Drama Center was new, a year when their star quarterback went down with a knee injury and they lost The Game by the inglorious score of 39 to 6. Many people still smoked: indoors, outdoors, wherever, and faculty members thought nothing of holding cigarettes or pipes when sitting for photos.

Radcliffe was still a college. Women and men attended class together but lived largely separate lives. There were few ladies’ rooms in the Yard, and women were barred from Lamont Library. For the men, House life was a bit crowded, and the major protest concerned not civil rights or the war in Vietnam, but the printing of Harvard diplomas in English instead of Latin.

For the Harvard and Radcliffe Classes of 1961, their 50th reunion not only draws them back to campus, it brings back memories of a time on the cusp of change, when the prosperous 1950s had ended, but the ’60s were not yet turbulent, when the word “assassination” conjured up William McKinley and 1901, and when an arms control protest drew just 35 marchers.

Hundreds of class members were attending events this week in and around Harvard Yard. Starting Monday (May 23) with a welcome dinner with President Drew Faust and Faculty of Arts and Sciences Dean Michael D. Smith, the classmates had a program of tours, discussion groups, and symposia, all capped off with participation in Commencement exercises today (May 26).

Reflecting on their time at Harvard and Radcliffe and on the years since, class members spoke of challenges overcome, of friendships made and maintained, and of a new generation raised.

When thinking of the impact of his years at Harvard, David Crosby, one of three reunion co-chairs, said that although he pursued a career in law, it has been the introductory fine arts and music classes that he recalls most often.

“On a daily basis, I hear music on the radio, and I remember going to the music lab and listening to some of the pieces,” Crosby said.

The biggest surprise in the intervening years, Crosby said, has been his continuing strong connections to his Harvard classmates. Having stayed involved in class activities after graduation, Crosby said some of his closest friends are classmates, but not necessarily those he knew as a student.

“It wasn’t necessarily the professors or courses or facilities that meant the most to me, it was the contacts that continue today,” Crosby said. “They’ve become some of my best friends.”

Carol Lieberman, another reunion co-chair, looked forward to the first time their classes would hold a joint Harvard-Radcliffe reunion. Lieberman said Radcliffe and Harvard in those days were separate places. Women lived in Radcliffe Yard, they could study at a Radcliffe library in Harvard Yard but couldn’t go into the other libraries. Even the Commencements were separate.

“It was a very different time, so it made it a fairly tight-knit [Radcliffe] community,” Lieberman said. “Most of the men in our class had no idea how different it was for us.”

Ruth Scott, who co-chaired the Harvard and Radcliffe 50th anniversary class report, said opportunities after graduation were different then too. Scott recalled that, for the 35th anniversary report, someone looked up the job interviews offered Radcliffe students in 1961. One was for the USO, entertaining soldiers. Others were with companies interviewing Harvard men — but only if the interview schedule wasn’t already full.

Lieberman said her daughter once questioned why the Radcliffe women didn’t protest. Lieberman explained that the protest years really didn’t hit campus until later in the decade.

Scott recalled some students boycotting Woolworth stores because they often didn’t serve blacks in the South, but she said the rumblings of discontent seemed far away to her. Howard Shapiro, who serves today as the class webmaster, recalled working on the Harvard-Radcliffe Liberal Union with Barney Frank, now a member of the U.S. House, but agreed that times were different then.

For his part, Crosby recalled participating in the “diploma riots” before graduating that spring.  Shapiro attributed the disturbances to springtime and the spirits of “post-adolescent, pre-adult males.”

Shapiro, who arrived on campus at the tender age of 16 and who has had success since graduation creating flow cytometers — cell-sorting machines — recalled playing guitar and singing on WHRB and starting his own radio station in Leverett House.

One development that did generate political excitement was Kennedy’s election. Scott said there was a strong feeling on campus that Kennedy was one of their own, and the election marked the first time she voted. Lieberman recalled the day when Kennedy was inaugurated. She had an exam, and a New England blizzard was blowing.

Since leaving Radcliffe, Lieberman, like many of her classmates, has experienced life’s twists and turns. She has managed to hold on through the ride, reinventing herself as a single mother of three children after a divorce, and then again as an executive of a nonprofit that matches volunteers with opportunities.

“Sometimes life gets in the way of plans. I think that’s true for many of us,” Lieberman said. When asked what her 21-year-old self would think of her now, Lieberman responded, “That other me might be a little bit surprised that I could reinvent my life, find new paths, and take on responsibility. I’m much stronger than I ever anticipated.”

Scott said that members of the Harvard and Radcliffe Classes of 1961 have had all kinds of careers, some successful, some less so, in many fields. But looking through the class reports, one common thread mentioned by many is the importance of their families.

Joshua Young, who married two days after graduation, learned a valuable lesson about Harvard at an earlier reunion, when he’d been out of school for more than a decade. He returned to Adams House with his teenage son and found a man and two women in his old room — unheard of in 1961. He pondered the change as he brought his son down to the dining room, where a worker surprised him, after all those years, by greeting him by name.

“The more things change, the more they stay the same,” Young said.