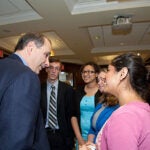 In its first expansion in more than three centuries, the Harvard Corporation will add three new members this July: a distinguished university president soon stepping down from his post, a leading computer scientist and former president of the University’s Board of Overseers, and an admired business and civic leader widely active in Harvard alumni affairs.

Tufts University President Lawrence S. Bacow, Susan L. Graham of the University of California, Berkeley, and Joseph J. O’Donnell, an influential Boston executive who is the chairman of Centerplate, will join the governing board formally known as the President and Fellows of Harvard College, after a five-month search that yielded more than 500 nominations.

The appointments were announced today (May 25) in a message to the Harvard community from President Drew Faust and the Corporation’s senior fellow, Robert D. Reischauer.

“We’re very fortunate to welcome such a capable and committed trio of alumni to the Corporation,” said Faust. “Each of them brings expertise and experience that the Corporation will greatly value, and each has an intensity of commitment to higher education, and to helping Harvard adapt and thrive in changing times, that promises to serve us well.”

The appointments follow the Corporation’s announcement this past December of a set of changes intended to enhance its collective capacity, including an expansion from seven to 13 members over the course of two to three years. Reischauer and Faust have said the changes aim to enhance the governing board’s ability to focus on long-term strategy and University priorities and to meet the needs of an institution far larger and more complex than at the time of its founding.

“These are three individuals with extensive governance experience who exemplify the remarkable accomplishment of our alumni across a range of professional domains,” said Reischauer, who chaired the search committee. “They are also three people strongly engaged with higher education and with Harvard, knowledgeable about its history and values and dedicated to its future excellence. We set out last December to amplify the Corporation’s capacity, and the addition of these three extraordinarily able new colleagues will do just that.”

Bacow is regarded as one of the most thoughtful and effective university presidents in the nation, known for a strong commitment to civic engagement, to student access, and to promoting collaboration among Tufts’ different schools. He holds three degrees from Harvard, a J.D., an M.P.P., and a Ph.D. in public policy. He will step down as Tufts president this summer, after a decade of service.

“This is a pivotal moment for universities, at a time of profound change in the world, and I hope I can help Harvard continue to lead in defining what a university can and should be in the years ahead,” Bacow said. “Harvard sets a high standard for all of higher education, and I’m pleased and excited at the opportunity to return to Harvard in this new role.”

Before leading Tufts, Bacow was the chancellor of the Massachusetts Institute of Technology, his undergraduate alma mater, where he joined the faculty in 1977 and was chair of the MIT faculty and director of MIT’s Center for Real Estate. His scholarly interests lie at the intersection of environmental studies, law, economics, and policy. He has had many trusteeship roles, including chairing the Talloires Network, which aims to strengthen the civic roles of higher education institutions worldwide. He currently serves on the Harvard Kennedy School visiting committee and will be “president-in-residence” at the Harvard Graduate School of Education in 2011-12.

Graham is the Pehong Chen Distinguished Professor Emerita of Electrical Engineering and Computer Science at Berkeley. She is a leading expert in programming language implementation, software development, and high-performance computing. A graduate of Radcliffe College who received her Ph.D. from Stanford University, she was a Harvard Overseer from 2001 to 2007 and chaired the Board of Overseers in 2006-07, when she also served on the presidential search committee.

“I have relished my association with Harvard from my college days through my recent years as an Overseer, and I approach my time on the Corporation with a deep sense of the University’s power to transform the lives of students and to shape the world of ideas,” she said. “There’s a great sense of possibility, and there are great opportunities for creative integration, from the sciences to the arts and across the professions. I look forward to doing all I can to help Harvard thrive.”

Past chair of the visiting committees to both the School of Engineering and Applied Sciences and the Radcliffe Institute for Advanced Study, she has also been an elected director of the Harvard Alumni Association and received the HAA’s Harvard Medal in 2008.   Her board involvements include service as a vice chair of Cal Performances, Berkeley’s vibrant performing arts organization.

O’Donnell, a native of Everett, Mass., is a graduate of both Harvard College and Harvard Business School. Early in his career, he served at HBS as associate dean of the M.B.A. program and then as director of the school’s Program for Management Development. Longtime CEO and chairman of the Boston Culinary Group, he is now the chairman of Centerplate, a nationwide leader in the food-service industry, and also owns Allied Advertising Agency.

“Harvard has been a central part of my life,” said O’Donnell, a prominent figure in Boston business and civic affairs. “There’s no institution I know whose people are more capable of doing great things for the world, and no alumni community I know whose members are more devoted to their university’s progress. I’m proud to be able to extend my service to Harvard by joining the Corporation.”

Widely active in philanthropic pursuits, O’Donnell, along with his wife, founded The Joey Fund in memory of their late son, and he has long been a leader in the National Cystic Fibrosis Foundation, among other board roles. He has for decades been one of Harvard’s most active alumni volunteers, serving as an Overseer, a visiting committee member, an elected director of the Harvard Alumni Association, a member of the Allston Work Team, an adviser to senior University officials, and a major force in Harvard campaign and development efforts. He received the HBS alumni achievement award in 2005.

In accordance with Harvard’s charter, the appointment of the Corporation’s three newest members was voted today (May 25) by the President and Fellows with the consent of the Board of Overseers. It marks the first step in achieving the Corporation’s planned enlargement, as it grows from seven to 10 and eventually to 13 members. In 2011-12, the Corporation is also expected to launch several new committees, in areas including finance, facilities and capital planning, and governance, as well as a joint governing boards’ committee on alumni affairs and development.

These and other changes grow out of an in-depth review in 2009-10 of the role, structure, and practices of the oldest corporation in the Western Hemisphere as it guides a university of Harvard’s scale, ambition, and complexity forward in the 21st century.