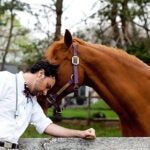 All creatures great and small

This past April, right before exams, most Harvard Law School (HLS) students were camped in the library studying legal precedents. Meanwhile, Jason Harrow was appearing before packed crowds in Boston’s 1st U.S. Circuit Court of Appeals, making a compelling case to overturn one.

Five months after he argued his team to victory at HLS’s Ames Moot Court Competition, Harrow found himself giving another oral argument in federal court — and this time, the stakes were real. Harrow’s work will help decide the fate of Joel Tenenbaum, a Boston University graduate student fined $675,000 for illegally downloading and distributing 30 songs, and possibly the future of copyright law.

“We just don’t think that this incredible penalty was ever intended for a college kid sharing music like everyone else,” said Harrow, who graduates this week. “Did Congress really think that when they passed [a digital copyright law in 1998] they were subjecting someone like him to these penalties?”

It was a cogent case that Charles Nesson, Weld Professor of Law, called “the best student oral argument ever.”

“He has an excellent ability to articulate the issue and to speak to it in a way that just makes sense,” said Nesson, who has led Tenenbaum’s defense against the record-industry lawsuit since 2007 and who agreed to let Harrow argue at the appellate hearing.

But Harrow offered more than a talent for shaping an argument. In a school where students can easily get caught up in the rat race, competing for law review spots or prestigious summer associate positions, Harrow devoted himself to Tenenbaum’s underdog cause with rare passion.

“He’s not the gunner,” Nesson said, referring to the HLS term for overachievers. “But he delivers.”

A Philadelphia native, Harrow attended Princeton planning to become a doctor. But even after he took the MCAT, he couldn’t shake the feeling he might make a good lawyer. Upon graduating he moved to Washington, D.C., and became an assistant for Tom Goldstein, an appellate lawyer and co-founder of the popular Supreme Court news website SCOTUSblog. After two years on the job, he decided to matriculate at HLS.

“I had put a lot of time into organic chemistry,” Harrow said, “but it became pretty clear that I liked doing this more.”

Harrow knew he wanted to participate in moot court from the start. The 100-year-old competition isn’t for the faint of heart. Over three semesters and three rounds, Harrow and his team wrote hundreds of pages of legal briefs on fictional cases and spent weeks preparing for oral arguments, which take place before real judges — including, in the final round, Chief Justice of the United States John G. Roberts Jr. ’76, J.D. ’79.

“I considered my strength to be the distiller” of the group, Harrow said, “the person who could take a deeply complex argument that my smarter colleagues thought of and say it in 30 seconds before you get cut off by a judge.”

All the while, Harrow was helping Nesson with Tenenbaum’s case. Drawn to the complex mix of constitutional, technological, and cultural issues the case represented, Harrow joined the defense team right after Tenenbaum lost at trial in July 2009 and decided to appeal. Harrow and Nesson spent long hours drafting briefs and hashing out complex legal arguments, wading into uncharted territory. (The case is the first of its kind to make it to the federal level.)

At 27, Harrow is the same age as his client. A music junkie himself, he remembers the days of free-for-all file sharing, before services like iTunes made it easy to obtain digital copies of songs legally.

“I love music, and I want to pay for it,” Harrow said. “But I don’t think the record industry should be able to use the law to bully people into protecting an old business model that nobody wants.”

This summer, Harrow will begin a yearlong clerkship with the 9th U.S. Circuit Court of Appeals in San Francisco, followed by a year working for a trial judge in New York. After that, he’d like to find a position that allows him to dig even deeper into intellectual property issues.

Meanwhile, Tenenbaum’s case remains in limbo. As a federal court employee, Harrow will no longer be permitted to help, which is “a bummer,” he said.  “But I’m sure there will be a fresh supply of talented, more energetic law students to keep it going.”