The humanities and war 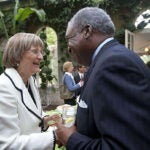 In Jefferson Lecture, Faust probes the literary draw of conflict

WASHINGTON, D.C. — As re-enactors don the blue and the gray to commemorate the Civil War’s 150th anniversary, young men and women dressed in fatigues are locked in combat half a world away under the flag of a nation that was reshaped by that 19th century conflict.

And as hundreds of writers have grappled with the meaning of the War Between the States, hundreds more will try to wrest some sense from the contemporary violence in the Middle East, just as authors have tried to explain war since the time of Homer.

But can we fully grasp the reality experienced by the combatants in Iraq or Afghanistan any better than we do the sacrifices made on the plains of Troy? Do the Civil War re-enactors, clad in their painstakingly replicated uniforms, fully embrace the meaning of the conflict that they play out for enthusiastic spectators?

And what is the role of the writer in framing our understanding of war?

Those questions were at the heart of an address by Harvard President Drew Faust, who Monday night (May 2) delivered the National Endowment for the Humanities’ 2011 Jefferson Lecture in the Humanities.

Our understanding of any war is shaped by the prevailing sociopolitical dynamics of our time. The humanities play a leading role in that process, since evidence gathered by researchers and writers provides the bulwark for the discussion of past conflicts, said Faust, a historian of the Civil War.

“Will we in this historic sesquicentennial — to be observed at a time when Americans are involved in real conflicts in three sites across the globe — forget what a heavy responsibility rests on those who seek to tell the stories of war?” Faust asked the audience of about 1,500 at the Kennedy Center.

In Faust’s view, the humanities and war have been engaged in a centuries-old seduction in which scholars and poets, drawn to the extraordinary human and political dimensions of military conflict, try to wring meaning out of violence carried out on such a scale that words cannot adequately describe it.

“As we have sought through the centuries to define ourselves as human beings and as nations through the prisms of history and literature, no small part of that effort has drawn us to war,” she said. Noting that the first masterwork of Western literature was “The Iliad,” “a tale that exerts a wrenching power more than two millennia after its origin,” she added that “we might even say that the humanities began with war, and from war, and have remained entwined with it ever since.”

The Jefferson Lecture is the most prestigious honor the federal government bestows for distinguished intellectual achievement in the humanities.

“History can sometimes be more controversial than current events. This is particularly the case with the Civil War where its causes remain subject to differing interpretations,” said former Congressman Jim Leach, chairman of the NEH. Faust’s lecture, he said, “provides important insights into our greatest internal conflict. By placing the Civil War and memories of it in the context of the history of war itself, dating back to the ancient Greeks, she sheds perspective on conflicts of all kinds in all circumstances.”

Rep. John Lewis, D-Ga., a leader of the Civil Rights movement who read Walt Whitman’s “Dirge for Two Veterans” before Faust was introduced, said he had attended many Jefferson Lectures, but “this is one of the most moving.”

“I loved how she had the ability and the capacity to say what war is all about. It’s messy. It’s dirty. We shouldn’t romanticize war. We should see it for what it is,” Lewis said. “I think it’s so fitting and appropriate for the times in which we live.”

More than reflecting the trials and consequences of battle, Faust said, the humanities have played a role in shaping the very concept of war. By labeling violence “war,” we frame it as a story with a plot and actors moving toward a promise of victory.

“How is it that the human has become so entangled with the inhumane?  That humanity’s highest creative aspirations of literature and imagination have been all but inseparable from its most terrible invention: the scourge of war?” Faust asked. “Humans are unique in their creation of an institution of war that is designed to organize violence, define its purposes, declare its onset, ratify its conclusion, and establish its rules. War, like literature, is a distinctively human product.”

The extraordinary nature of an event in which human life is at stake accounts for much of the attraction that war holds for writers, Faust observed, and ages of prose and verse extolling the virtues of an honorable battlefield death helped draw generations of young men into the horrors of war.

Even after history’s lens had shifted and the horrors of war were emphasized as directly as its glories, the attraction persisted. Ernest Hemingway once remarked to F. Scott Fitzgerald that “war is the best subject of all” because it gathers narrative material, speeds up the action, “and brings out all sorts of stuff that normally you have to wait a lifetime to get.” Faust likened Hemingway’s description of war to the dramatic structures laid out in Aristotle’s “Poetics.” “The inherent ‘magnitude’ of a war story is, of course, that it is about life and death, about the quintessential moment of truth when the ultimate is at stake,” Faust said.

The narrative promises of a war, Faust said, can also serve as political expedients. She suggested that declaring “war” on terrorism helped U.S. government leaders frame their response to what seemed a ubiquitous threat. “Responding to terrorism with war replaced the specter and fear of mass murder with a hope for the controlled, ordered force of war,” she said. “It offered the United States the sense of intention, the goal-directedness, and lure of efficacy that war promises and terrorism obliterates. …

“We expect wars to come with endings; that is part of their story. The language of war made Americans protagonists in a story they understood rather than the victims or potential victims of forces beyond their comprehension or control.”

Looking simultaneously back on the conflict that has been the focus of much of her career and ahead to the conflicts that await American soldiers in the weeks and months to come, Faust recalled the words of poet Walt Whitman, who warned that “the real war will never get into the books.”

“It would indeed be impossible ever fully to capture war’s contradictions, its paradoxes, its horror, and its exhilaration,” she said. “We have grappled to use the humanity of words to understand the inhumanity of war. As we continue to be lured by war, we must be committed to convey its horrors. We must make it our work to tell a true war story.”