The game ends, and life begins 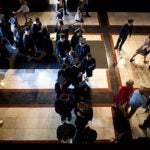 A celebration of excellence

In certain pockets of Harvard, the name Isaiah Kacyvenski recalls memories of gridiron glory. When you’re the 16th Crimson footballer ever to make the National Football League draft, your name tends to have that effect.

But for the past two years at Harvard Business School (HBS), Kacyvenski ’00 has been carving out a new identity at the University: as a businessman, a dedicated father, and a guy in search of life after football. At 33, he’s older than the average M.B.A. student, but pretty young for a retiree.

“Football was a massive part of my life, my pure bliss,” said the former linebacker, who graduates from HBS this week. “But I had to keep moving. … I’m trying to find my next love, my next passion.”

Still, some things remain the same. He’s steadfastly committed to family, particularly his son, Isaiah, who is 7, and daughter Lily, 5. And he has continued to inspire other young people to believe in their dreams, as he did.

“When you’re that young, you don’t realize that [your decisions] set up the rest of your life,” said Kacyvenski, who frequently speaks at schools and to young athletes. “You have to be your own rock — it’s something I try to impart in people, kids especially.”

Kacyvenski would know. Before football took him to Harvard College and the NFL, he endured a hardscrabble childhood that rarely allowed him the option of relying on anyone but himself.

He grew up in Endicott, N.Y., the youngest of five children. His parents divorced when Kacyvenski was 9. That same year, he heard a football game on the radio and was hooked.

“It just captured my imagination,” he said.

Over the next several years, Kacyvenski would use football as the central peg in his plan to lift himself out of the poverty he had known all his life. His free-spirited mother, the “guiding force” in his life, spent long stretches traveling as a missionary, leaving Kacyvenski and his siblings to negotiate home life with their sometimes-violent father. Then, the morning of a state semifinal during his senior year of high school, Kacyvenski learned that his mother had been struck by a car and killed. Devastated, he played anyway.

“After that day [football] became a place to lose myself,” he said.

He was recruited by Harvard coach Tim Murphy and excelled at the College, starting in every game while taking pre-med courses and working part-time jobs. The honors and records piled up: Ivy League Rookie of the Year, three-time First Team All-Ivy, most single-season and career tackles in Harvard history.

Kacyvenski was signed in the fourth round of the NFL draft by the Seattle Seahawks, a rarity for an Ivy League player. His career took off quickly — he helped lead the Seahawks to their first Super Bowl in 2006. But a knee injury the next year effectively ended Kacyvenski’s professional run.

“I was smart enough to realize the end was probably near,” he said. “I realized I needed a business background if I was going to succeed.”

In 2007, while a free agent, he attended two weeklong executive education sessions at HBS through its NFL Business Management and Entrepreneurial Program, and decided to apply to the M.B.A. program. He was drawn to the case method of learning at HBS.

“Every day felt like game day for me last year,” he said of the intense discussions that would often erupt in the 90-person lecture halls. “I needed to have a strategy going in. It was the closest duplication I could get to the adrenaline rush of football.”

Heading back to school was hardly a reprieve, Kacyvenski said. He struggled through a divorce, as well as a knee surgery this past January that led to a staph infection and 12 weeks of recovery. Unlike his classmates, his job search didn’t extend to Silicon Valley and New York. He is now weighing job offers in Boston, in order to be close to his ex-wife and their two children in Weston, Mass.

“At first I had a hard time juggling, trying to be there as a father, as a student, as a businessman,” he said of his time at HBS. “There’s one ball I’ll never drop, and that’s my kids.”

Kacyvenski wasn’t able to attend his first Commencement in 2000; he had already been called to NFL training camp. In a display of his ample charm, he was able to persuade the University to let his father, with whom he had reconciled, walk in his place.

This time, Kacyvenski will be able to collect his diploma himself, but another exception will be made. His children, he said, will walk with him.