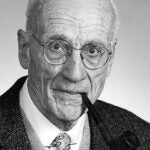 Reinhold Brinkmann, a distinguished scholar whose writings on music of the nineteenth and twentieth centuries made an indelible mark on musicology in Germany and the United States, taught in the Department of Music at Harvard University from 1985 until his retirement in 2003, serving, after 1990, as James Edward Ditson Professor of Music and, from 1991-1994, as department Chair.

His commitment to teaching and high standards for performance from students was clear in the way he ran his Core course, “The Symphonic Century.”  He told students that he assumed they could read music and had considerable experience with the repertory already.  But just in case there were students who felt that a little brushing up might help, he came an hour early to every class to give a sort of shadow course to anyone wise enough to realize what a gift they were being given.  In his Core course on fin-de-siècle Vienna, Reinhold, who did not like the word “interdisciplinary,” spoke with passion and immense erudition about the paintings of Kokoschka and Klimt, the plays of Hofmannsthal, the novels of Joseph Roth, and the architecture of Adolf Loos.  Most amazing of all, he inspired legions of undergraduates to delve into, appreciate, and, in some cases, even to love the atonal music of Schoenberg, Berg, and Webern.

Reinhold was in his time at Harvard not only a remarkably warm and caring colleague, but a very effective Chair, in part thanks to his strong relationships with colleagues in composition, theory, and music history.  He was that rare figure of a music historian who was passionately curious about the newest music.  He worked closely with all his Harvard composer colleagues, and also enjoyed close friendships with composers Helmut Lachenmann, Wolfgang Rihm, and Luciano Berio, who dedicated his Sonata per pianoforte solo to him in 2001.

Reinhold came to Harvard from West Berlin, where he had been a Professor at the Hochschule der Künste since 1980, and, prior to that, Professor of Musicology at the University of Marburg.  From 1976-1980, he directed the Institut für Neue Musik und Musikerziehung in Darmstadt.  He received his doctorate from the Universität Freiburg (with H. H. Eggebrecht) in 1967, and his Habilitation from the Freie Universität, Berlin (with Rudolf Stephan) in 1970.

Born in 1934, in Wildeshausen, Germany, at a time when his country was ruled by an infamous regime that did not, fortunately, last one thousand years, but only twelve, Reinhold often spoke of one of his earliest memories: when he was four years old, experiencing the tumult and the smell of burning buildings on Kristallnacht, he could not understand why the firemen did not come.  These childhood traumas not only shaped Reinhold’s later left-wing political consciousness, but also underlay his acute awareness of the links between music, culture, and society.  At his death, he was working on a book called “The Distorted Sublime” about how the Nazi regime appropriated and misused the German classical musical tradition.

His writings span a broad range of topics, including the Second Viennese School (especially Schoenberg), the Romantic Lied tradition, Wagner, Skryabin, Varèse, Eisler, and Ives.  Brinkmann’s work combines intimate knowledge of the music, often shown in detailed, painstaking analyses, with an awareness of its social and political backgrounds and ramifications.  His publications include his nuanced and thought-provoking study of Brahms’s Second Symphony, Late Idyll (Harvard University Press, 1995) and a volume on German musicians who fled Fascism, co-edited with Christoph Wolff, “Driven Into Paradise”: The Musical Migration from Nazi Germany to the United States (1999).  His edition of Schoenberg’s Pierrot lunaire for the Schoenberg Gesamtausgabe, in particular his book-length critical report on the work’s sources and its historical and biographical position, was a groundbreaking contribution to the Schoenberg literature.  His choice of Arnold Schoenberg’s atonal music as a dissertation topic was highly unusual in Germany in the 1960s.  In his path-breaking study of Schoenberg’s Three Pieces for Piano, Op. 11, Brinkmann developed his own analytical method, rigorous yet contextual, which yielded major insights into Schoenberg’s aesthetic and historical position.  A lifelong interest in German Lieder and poetry was reflected in his monograph, Schumann und Eichendorff: Studien zum Liederkreis Op. 39 (1997) and in his substantial contribution on the nineteenth century Lied tradition in the volume Musikalische Lyrik (2004).  Reinhold was always fascinated with the frieze of famous composers’ names in Paine Hall, and his last publication, Harvard’s Paine Hall: Musical Canon and the New England Barn (2010), was a playful and learned essay on the origins of the building and its visible display of the musical canon, anno 1914.

In 2001, Reinhold was the first musicologist to be awarded the prestigious Ernst von Siemens Music Prize.  His acceptance speech was a visionary declaration of what musicology could be.  This “new musicology” imagined, first, the fundamental equality of all musical traditions as objects of study.  He also envisioned new ways of communicating about music that could include the general public: “I see musicologists learning from poets, speaking and writing in an understandable but richly nuanced language.”  His own work, with its lucid prose, forceful thinking, and deep humanity, exemplifies this vision.  In 2006 he was elected an Honorary Member of the American Musicological Society, a major honor and a singular one for a scholar neither born nor trained in the United States. Conversations always branched out from music to art, literature, architecture, sports, and history, and he always had time to talk.  Reinhold had an absolutely penetrating gaze when he was looking for a certain answer—it sometimes terrified graduate students until they saw where he was going, said the right thing, and were rewarded with his thundering “yes!”  His colleagues sometimes felt the same terror and joy.

He possessed a sartorial elegance that we may not see in our department again.  Most inspiring to his students was his conviction that musicology was not simply an academic discipline, but rather a deeply ethical undertaking that could have a real impact on the way we hear music and see the world.  Musicology has lost a scholar of great insight and integrity, and we will miss him.

Reinhold Brinkmann died, after a long illness, in Eckernförde, Germany, at the age of 76. He is survived by his wife, Dorothea, and his brother, Richard.