Racing to find her passion 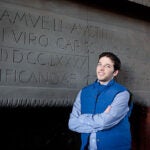 Skiing is in Marguerite Thorp’s DNA. So is perseverance.

The Michigan native was on skis at age 2. When she was a child, her parents moved the family west, and she spent her youth in the snow-packed mountains of Colorado and Utah, careening down trails, hungry for speed and any jumps she could find.

“I was in love with being in the air,” Thorp recalled.

But a horrific crash on the slopes during a routine race with the Harvard Ski Team during her junior year left her with a metal plate and six screws in her left leg, and a torn anterior cruciate ligament in her right leg. The sanguine senior, who spent almost two months on campus in a wheelchair, knows it could have been worse.

“I was lucky,” Thorp said. “At least I was still able to do a number of things myself.”

But Thorp’s determination and her skiing experiences would shape her life at Harvard and beyond in ways she never imagined.

On her left hand is an engagement ring from another skier with a passion for the sport, global health, and social justice. Her fiancé is Matthew Basilico, a Harvard graduate and Harvard Medical School student.

Thorp jokingly called their romance “scandalous,” describing how they met when she was a freshman and he was senior captain of the men’s ski team. When the pair realized they shared a mutual interest in Africa, and in issues of public health and social justice, their connection blossomed.

“Matt,” she said with a smile, “was very special.”

Several factors deepened Thorp’s interest in public health and social justice her first year at Harvard. There was the “life-altering” class about Africa and the legacy of colonialism taught by Harvard Professor Caroline Elkins. She became involved with the Harvard College Global Health and AIDS Coalition. And she read “Mountains Beyond Mountains,” the book about Paul Farmer, the Harvard doctor and founder of Partners In Health, a mainstay health care provider in Haiti.

But for the competitive athlete, skiing was still paramount. Thorp arrived as the school’s fastest female racer and established herself as a vital part of the Crimson’s alpine team. She took a break from school during her sophomore spring semester, preparing to try out for the 2010 Winter Olympics U.S. ski cross team. But stress fractures in both legs forced her to drop out.

So she headed to Africa. Thorp used her time off in the landlocked African nation of Malawi to work with Partners In Health and the William J. Clinton Foundation on public health initiatives. The four-month trip was a turning point.

“It was the best Plan B ever,” she said of her decision not to return immediately to Harvard. “I have no idea how I would have stayed with pre-med if I hadn’t seen the outlet of working internationally and working in settings of poverty.”

The following year, Thorp’s skiing crash forced her to trade her third-floor room in Eliot House for a ground-floor unit in Leverett House. She relied on friends and Harvard staff to navigate campus life with her two injured legs, but her spirit never dimmed.

“There is an incredible support system built in for things like this. All in all, it was as positive an experience as it could be,” she said.

Determined to return to Malawi, Thorp held off on surgery to her right leg so she could continue her public health work there last summer.

She had her torn ligament repaired just weeks before classes began last fall. Knowing that the decision meant she would be unable to compete, Thorp helped out as the team’s assistant coach, mentor, driver, and sometime cook. The previous season her teammates, inspired by her ongoing support despite her injuries, had elected her captain.

“Being asked to lead the team while transitioning from a wheelchair to crutches was a huge honor,” she said.

With plans to attend medical school in 2012, Thorp credits her Harvard experience with helping her to develop and maintain her passions.

“I don’t think there are many other places I could have held together those two interests in any way. I am so very, very grateful to Harvard.”

As for her other passion, Thorp and Basilico will marry next June.