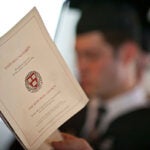 ‘Finish your own sentences’

Few would disagree that Harvard Business School (HBS) students are driven to succeed. But what, exactly, drives them?

When Tony Deifell, M.B.A. ’02, asked that simple question nearly a decade ago, his inquiry produced surprisingly deep insights into the hopes, dreams, and motivations of his graduating class — and created a tradition, the HBS Portrait Project, that’s still going strong at the School.

Now in its 10th year, the Portrait Project solicits written responses from graduating M.B.A.s to the question once posed by poet Mary Oliver: “Tell me, what is it you plan to do with your one wild and precious life?” A selection of 34 of those short essays, accompanied by black-and-white portraits that Deifell shoots of each student, will be unveiled Tuesday (May 24) from 3 to 5 p.m. in a public reception at HBS’s Spangler Center.

“It seems like a relatively simple question, but it’s quite daunting to answer,” said Shahar Ziv, one of this year’s student organizers.

Far from dry mission statements or résumé bullet points, this year’s crop of Portrait Project essays reveals experiences — a childhood spent on a family farm, the loss of a brother, a missed opportunity to play Harvard football, a cancer diagnosis — that business students wouldn’t necessarily reveal in a classroom or at a networking reception. The students write of goals measured not in dollar amounts or professional achievements but in how many lives they’ll influence or how well they’ll stick to their most personal core values.

“We don’t have these types of conversations that much,” Ziv said. But leaders need to have the ability to be reflective, he said. “You can’t understand others without understanding yourself first.”

The project has largely been kept alive by student interest. Nearly 130 graduating M.B.A. students submitted essays this year in the hopes of being chosen by Deifell and the student committee of Ziv, Dominique Baillet, Clive Chang, and Michael Lage.

HBS has helped to keep the tradition going by providing monetary and administrative support. And Deifell, now a media strategist and entrepreneur based in San Francisco, has flown to Boston each year to take the portraits himself.

“It shows a side of M.B.A. students that people don’t typically see or hear about,” said Betsy Brink, assistant director of M.B.A. communications and marketing and the staff manager of the project. “If there’s a stereotypical view of what an M.B.A. student is, this project does its best to bust that stereotype in a really positive way.”

The project highlights what Deifell believes is a trend toward reflection and ethical accountability among HBS students. Each year when he returns to photograph students, he said, he has noticed an increasing focus on “doing well and doing good in the world at the same time.”

“It’s not enough to make money; it’s how you make money,” Deifell said. “There’s been more of an emphasis on that, I think, and a growing sophistication in blending the two.”

What he hoped to inspire with his portrait series, he said, was a way to think of professional ethics not “as guardrails or parameters” but as a method matching one’s behaviors and actions to one’s most personal core values.

“You do need parameters and guardrails, but by focusing in on a goal, a purpose in the world, right action will come from it,” Deifell said. “It’s more about putting a stake in the ground and living in a purposeful way.”

Baillet, one of this year’s student leaders and a portrait subject, said she struggled to come up with a thread that binds her zigzagging career path. She has worked as chief of staff for Teach for America leader Wendy Kopp, as a management consultant at Bain & Co., and for an international development fund in Swaziland, and will return to Bain after graduation. What she truly valued in all those roles, she realized, was the ability to use the “big mouth” that had gotten her in trouble as a child.

“I wanted to avow what was important to me, what I could do wherever I am,” Baillet said. “For me that was speaking my mind and encouraging others to speak their mind, and using that to solve greater problems. I can do that whether I’m working in consulting for the next few years, or if I’m working for a public school system 10 years from now.”

The portraits will be on display in the Spangler Center until the end of the month. After that, they’ll be hung around the building’s conference rooms, the M.B.A. admissions office, and the HBS Office of Career Services, serving as reminders of a deeper purpose that drives the School’s students.

Next year, HBS is considering hosting a reunion for Deifell’s first subjects, the Class of 2002, to see how their ambitions have changed — and whether they’ve lived up to the sentiments captured in those fleeting moments before graduation.

“A lot of … people use this as an anchor, as something to come back to throughout their lives,” Ziv said.