Pianist on the rise 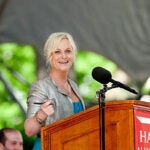 Virtuoso also has a gift for humility

The story goes like this: When Charlie Albright was a mere 3 years old, he climbed atop the family piano and began tapping out “Twinkle, Twinkle, Little Star.”

Whether the story’s true, or just a mother’s loving exaggeration, the Centralia, Wash., native had an early ear for music to be sure. His mother enrolled him in music classes immediately, where he played by ear before training classically at age 7.

But this piano virtuoso is no one-trick pony. By the time Albright graduated high school, he’d earned an associate’s degree in science. “In looking at colleges,” he said, “I wanted to continue music and also continue academics.”

Harvard’s joint program with nearby New England Conservatory appealed to Albright, a pre-med and economics concentrator who will receive a master’s of music in piano performance from the conservatory in 2012.

“If I could do anything, I’d do music,” said Albright, who released his first album, “Vivace,” in February. “I love performing, but reality kicks in. It’s hard to make a career in music, and a huge majority of it is good fortune and luck.”

Modest? Quite. Albright, whom The Washington Post described as “among the most gifted musicians of his generation,” is almost bashful when discussing his successes, which include playing alongside Yo-Yo Ma ’76 at a 2008 Harvard ceremony presenting an honorary degree to Sen. Edward Kennedy.

“One morning I woke up and I got an email, and it read, ‘Charlie, do you want to play with Yo-Yo Ma? For Sen. Kennedy?’ And I about fell over.”

In 2009, Albright won first prize in the Young Concert Artists International Auditions and received professional management as a result. He’d always toured, but in the past few years his career has taken off.

Does touring ever get in the way of his schoolwork? “Oh yeah, all the time,???? he said.

“This year it was one or two concerts a week, and lots of traveling. I was gone all the time, which meant lots of homework in airports, in airplanes, and hotels. Lots of emailing in problem sets and papers.”

Last spring Albright had a mini-tour in Michigan — six concerts in two weeks. “A typical day would be to wake up, practice, have a rehearsal with an orchestra, take a nap, give a concert, do my physics problem set, wake up, and do it again the next day,” he said. “I flew back that first Sunday, had a lesson, spent the night, gave a presentation for a class, and flew back to Michigan. It was nuts.”

His favorite Harvard memory? A road trip through Canada with his roommates — not the time Vice President Joe Biden told him, “If I did my job as well as you do yours, I’d be president.”

“There’s so many absolutely phenomenal people, both in music and not, and I think I’m really fortunate because at Harvard you have a little bit of everyone,” said Albright, “and that’s crazily humbling.”

Albright will remain at Harvard next year, as the artist in residence at Leverett House, an honor last held by Yo-Yo Ma himself.