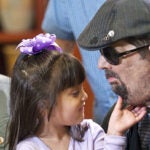 Research conducted by a Harvard undergraduate has traced the rise of mercury pollution in endangered seabirds and highlighted the importance of museum collections as a time capsule concerning conditions on Earth over the past century.

The research, by Anh-Thu Elaine Vo ’08, now a graduate student at the University of California, Berkeley, details mercury levels in the feathers of endangered black-footed albatrosses from 1880 to 2002, showing increased levels after World War II and after 1990, when Asian industrialization is believed to have increased emissions. Similar studies have documented the rise of environmental mercury levels in other seas, including the Atlantic and the North Sea, but this is the first to do so for the Pacific.

Mercury is known as a highly toxic pollutant that can have detrimental effects on the environment. It can become particularly toxic for top predators in a food web, because the consumption of creatures with lower mercury levels concentrates it in their tissues. This environmental concentration has led to human consumption advisories for some marine predatory fish, such as tuna.

Black-footed albatrosses, with 7-foot wingspans, are among the oceans’ top predators, living on small fish, squid, and crustaceans. Though Vo’s work illustrated that mercury does concentrate in the birds’ tissues, it is not known at what level mercury becomes poisonous in the birds. The albatrosses are considered endangered by the IUCN Red List, but the main threat to them is believed to be longline fishing, which snares an estimated 3,000 birds a year.

“We don’t know whether these concentrations are deleterious for this specific species although adverse effects are associated with the observed concentrations in other waterbirds,” said Vo.

Vo’s research was conducted under the guidance of Scott Edwards, an ornithologist and professor of organismic and evolutionary biology, and Michael Bank, a research associate in the Harvard School of Public Health’s Trace Metals Lab, where some of the mercury testing was done, and with the assistance of James Shine, a senior lecturer on aquatic chemistry. It was published online in the Proceedings of the National Academy of Sciences in April.

Vo examined mercury concentrations in feathers taken from two museum collections. One is Harvard’s Museum of Comparative Zoology (MCZ), which had specimens collected from 1880 to 1949, and the second is at the University of Washington, which had more-recent specimens. Vo said the assistance of the Harvard Trace Metals Lab and Dartmouth College Trace Metals Analytical Laboratory were critical to the research because she couldn’t have done the mercury analysis without it.

“We knew from the literature that mercury is highly toxic to animals, and we knew that humans have changed levels of environmental mercury,” Vo said.

The work analyzed levels of total mercury and of methyl mercury, a form of the element that is absorbed into an animal’s body. It also examined isotopes of carbon and nitrogen as a way to rule out the possibility that changes in the birds’ bodies were due to a shift in food sources. The research showed that the level at which the birds fed in the food chain didn’t change appreciably over time.

Bank said there had been speculation that mercury levels were rising in the Pacific, but the results provided confirmation.

“We don’t have just a model, we have actual data,” Bank said.

Edwards said the research highlights the value of museum collections. The birds in the MCZ’s ornithology collection, of which Edwards is curator, are commonly used by scholars to study their anatomy. But Edwards pointed out that their tissues also function as a time capsule for the world in which they lived.

“The collections are key,” Edwards said. “These birds were collected without any … thought about mercury.”

Bank said the research built on the “ghost” of past collecting work.

“We’ve harnessed the power of past expeditions,” Bank said.

Edwards and Vo said there are several follow-up studies that could be undertaken, including on whether this level of mercury in the tissues is detrimental to the birds’ breeding.

“We don’t really know if this has really impacted their reproductive success,” Edwards said. “I think there are some great follow-up studies to be done.”