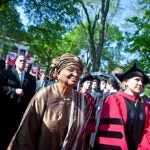 After weeks of rain and cold, Harvard ended the 2010-11 year on a postcard-perfect day of azure skies and warming breezes. Most of the  focus was on the speeches and rituals of Tercentenary Theatre, of course. But all across Harvard Yard, where graduating students, faculty, families, and friends gathered, there were thousands of magical moments as well. Here is a sampling.

A new sheriff in town
Middlesex County Sheriff Peter Koutoujian had big shoes to fill. His predecessor, James DiPaola, had called Commencement to order from 1997 until his sudden death last November. This year, Koutoujian took up the tradition, which dates to the 17th century. Standing at the front of the Commencement platform in a silk top hat, he struck the ground three times with a silver-tipped staff and intoned, “The high sheriff of Middlesex County now declares that the meeting will be … in ooorder!”

Koutoujian should have been somewhat familiar with such proceedings. He graduated from the Harvard Kennedy School with a master’s in public administration in 2003.

Men in kilts
Dressed in colorful tartan kilts, four members of the Stuart Highlanders Pipe Band from Wilmington, Mass., traversed campus in the early morning on their way to breakfast after waking seniors from Lowell and Eliot Houses with their playing and leading them to the Yard. But the piping procession encountered a couple of hazards along the way. “I did have a game of chicken with an elderly woman in a car,” laughed piper Matt Phelps. “She was trying to get in front of the parade.” Also treacherous, he said, was a game of chicken with a competing fife-and-drum group that was “playing in a different key.”

Among the maxims were “Think small, act large,” “Jettison your toxic regrets,” and “Live in the present … the only tense that truly matters.” Meyer urged graduates to embrace “the immensity of life” and reminded them they are leaving Harvard “as naked as Adam and Eve.”

“In a sense, the fall was a form of graduation,” he said.

A house of many hats
Dudley House seniors weren’t hard to spot coming out of the Memorial Church in the morning. Many sported decorated mortarboards, an informal House tradition.

One student had affixed a female symbol and peacock feather to her hat to symbolize “radicality.” A Che Guevara doll rested on another student’s mortarboard to represent “compassionate revolution.”

Alice Gissinger went literal, plastering Hans Wehr’s “Dictionary of Modern Written Arabic” atop her mortarboard. It made a fitting tribute to her undergraduate years, she said. “It’s every Arabic student’s co-pilot.”

Lowering the boom
A celebrity instrument, famous in its own booming right, made a rare appearance at Morning Exercises. Bertha, as members of the Harvard University Band call it, is believed to be the largest playable natural skin drum in the world. “I think two cows went into making her,” said Sebastian Gomez ’14, the band’s prop crew manager and Bertha’s main caretaker. He said she “tends to get stolen” by jealous students from colleges like Dartmouth, Brown, and Yale. The drum typically sits out Commencement, but the forecast of sunny skies made her handlers eager to wheel her out. “We were weather-watching the entire week,” said Gomez. Bertha doesn’t like the rain.

Quiet amidst the bustle
Richard Griffin ’51, at Harvard for his 60th class reunion, spent part of the morning reading in the quiet shade of the Yard. Nearly everyone else was in Tercentenary Theatre for the amplified Morning Exercises. He paused for a moment to listen to the Latin oration, savoring a language he once spoke with other young Jesuits during novitiate training. Griffin had left Harvard to join the religious order, but eventually returned in 1968 to serve as the College’s Roman Catholic chaplain until 1975. “Those were the sturm und drang years,” said Griffin, now a lay journalist and a longtime associate of Quincy House.

Oh, happy day
Amid the chaos of Commencement, somebody has to make sure that everyone’s having a good time. Enter the Committee for the Happy Observance of Commencement, a group of volunteers from the Harvard Alumni Association who assist with crowd control at Morning Exercises and escort guests and marshals in the afternoon.

“It’s said to be the oldest committee in the United States,” said John Finley IV ’92, a volunteer and head of Epiphany School, a free Episcopalian school in Dorchester.

Finley and his father before him have donned the committee’s signature top hats, long-tail tuxedo jackets, and striped pants for multiple Commencements. (“I got the hat in London,” Finley said, “but the outfit is quite expensive. Luckily you can amortize the cost over many years.”) Most important, he said, committee members advise guests that the best time to take photos is in the afternoon, at the Houses’ and Schools’ diploma ceremonies, preventing a parental scrum for photo ops.

But are the committee members required to be happy?

“I think congeniality is probably an important factor,” Finley said. “That, and a willingness to be here from 6 a.m. to 4 p.m. with a smile on your face.”

Verily, the truth
If you looked closely at the name tags of Class of 1961 graduates circulating through Harvard Yard, you just might have noticed something was a little amiss inside the printed Harvard shields they wore. Instead of being emblazoned with the traditional VE RI TAS, the letters said TR U TH. The reason for the switch from Latin to English was lingering, good-natured resentment over Harvard’s decision 50 years ago to shift to English on undergraduate diplomas. “Our symbolic demonstration for 50 years has been to have truth instead of veritas,” said Newell Flather, a purist member of the class.

Class of ’44, son of 1890
Robert Coolidge Davenport ’44, who turned 90 last month, made his way into Tercentenary Theatre today (May 26) with just a little help from a wooden cane. “I keep looking down at my name tag,” he joked. “It tells me who I am.” But Davenport, a retired major general in the Massachusetts National Guard who served as an Army officer in World War II, knows very well who he is: the son of an 1890 Harvard College graduate and the grandson of the man who invented the item of furniture still called the “Davenport.” He was in the Pacific Theater with the 27th Division getting ready for the invasion of Japan when two atomic bombs ended the war. “War is hell,” said Davenport, a retired marketing executive. “It doesn’t matter what tools they use.”

Leaders of the classes
University records don’t say who the oldest living Harvard and Radcliffe graduates are. But the oldest Harvard grads at Thursday’s afternoon ceremonies were Donald F. Brown ’30, A.M. ’35, Ph.D. ’55, of Stow, Mass., and George Barner ’29 of Kennebunk, Maine. Both are 102, though Brown is a month older. The two sat with family members at separate tables under the same tent behind Stoughton Hall in the Yard, where there is a traditional “tree spread” for older classes. Brown wore a ball cap that said “My life is in ruins.” (He’s a retired archaeologist.) Barner, a retired lawyer, gave up driving at age 100, “but my license to drive is still good.” Both sat while the alumni line formed, but they walked in the procession itself. Barner, representing the oldest class present, took the lead.

The squirrels are falling
In good years, the three first-aid stations set up for Commencement at Weld, Thayer, and Sever Halls treat little worse than blistered feet and dispense nothing more than Band-Aids.

Then there are the more serious cases: cardiac arrests, allergic reactions — and squirrel attacks.

“Sometimes the speakers [installed in Tercentenary Theatre] reverberate, and it shakes squirrels out of the trees,” said Frank Wang, a physician with Harvard University Health Services (HUHS) and the Department of Athletics, who has been a Commencement volunteer for 16 years. “The squirrels get confused, and they’ll end up scratching or biting people.”

As of 8:45 a.m., neither Wang nor HUHS nurse practitioner Richard Weintraub had seen any squirrel-related injuries while on duty at Weld Hall.

A degree of confusion
Honorary degrees are only awarded to the foremost figures in their fields, and translating the honorands’ expertise into layman’s terms for the Commencement audience can be difficult. The background of formidable art critic and Columbia University Professor Rosalind Krauss proved no exception.

As Provost Steven Hyman rattled off a list of avant-garde terms that Krauss has coined to describe modern art — “formlessness,” “pastiche,” “the post-medium condition” — some Dunster House seniors were visibly baffled. “Is that a disease?” one newly minted graduate asked of the latter.

Still, there must have been at least one history of art and architecture concentrator in Dunster, who provided an enthusiastic cheer of “Go, Rosalind Krauss!”

Banding together
Florid and sweating, Duncan Watts ’12, the drillmaster for the Harvard University Band, took a lunch break in the Yard between programs. Watts, wearing the drillmaster’s traditional black trench coat, was astonished at the age of some of those in the audience whom he and his band had just serenaded, including a 1929 graduate. “I think I’m crunching the numbers wrong,” he said. During Commencement Week, the College gives band members housing and food in exchange for playing at reunion events and official ceremonies.

A divine ceremony
Gathered in Memorial Church, a fitting locale for their diploma ceremony, students from the Harvard Divinity School, many of their caps topped with pipe-cleaner halos, greeted Dean William Graham as he handed out the precious documents that made their graduation official and their hard work worthwhile. Graham told them their time at Harvard “means nothing if it does not mean being better able to handle the business of living a life that is more than surviving. … We have done what we could here. Now we can only wish you Godspeed on your way. It is up to you to take charge of your destinies and find your way, according to your best instincts, your best judgment, and your best values. It’s up to you alone.”

Justices at peace
At Harvard Law School, the line of graduates waiting to receive their diplomas snaked around the tree-covered lawn in front of stately Langdell Hall, but the wait was worth it for Jessica Tucker, whose highlight of the day was seeing U.S. Supreme Court Justice Ruth Bader Ginsburg being serenaded by opera singer Plácido Domingo. (Both received honorary degrees.) “We had Justice [Antonin] Scalia teach our class during our 1L year, and they are really good friends despite their really different politics,” said Tucker. “It was nice to start our first year with him teaching us and end with her being part of the ceremony.” According to Tucker, the two justices like to go rug shopping together.

They said it
— “I guess I am here to applaud you, really. You seem to have made a real success of this Independence Day. Well done. And thanks for leaving us Canada,” said Adam Price, a Welsh politician, Fulbright Scholar, and recipient of a mid-career master’s in public administration from Harvard Kennedy School, during his address called “Declaration of Independence 2.0.”

— “All we are doing is giving suggestions that 90 percent of the time are going to be ignored,” a class marshal said, counseling his companions in their top hats and tails at the steps of Weld Hall. He urged them not to take “personally” any impolite reactions from eager relatives and friends they might be trying to guide.

— “I wasn’t really prepared for the magnitude of all this activity,” said Andrew Clark, Harvard’s director of choral activities, in his first year leading the Commencement Choir, a group of students formed for the day’s festivities. “There’s great excitement in the air.”

Photo Journal: Harvard staff photographers offer a tribute to the women and men of the Class of 2011, who become the most recent link in the “long winding train” of Harvard graduates.