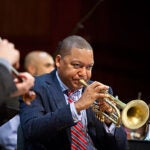 It was a very good year

Alumni strive for new levels of support for Harvard

Though it may have been years since they walked the Yard or mere days before they leave it, more and more graduates are choosing to support the College through an immediate use gift. Also known as current use funds, these resources are critical in advancing the Harvard experience today and in the future.

Harvard’s newest alumni were the first to reach their participation milestone with a record-breaking Senior Gift Campaign. The Class of 2011 achieved an 82 percent participation rate, with 1,236 seniors helping to set a new record for the third year in a row. In addition, the class reached a new record for associates-level giving, a gift of $250 or more for young alumni, and had 450 seniors sign the “Senior Gift Promise,” a nonbinding commitment to give back to Harvard every year until their Fifth Reunion.

How did they do it? Class of 2011 co-chairs Seth A. Bour, Courtney A. Cronin, Zachary M. Frankel, Casey L. O’Donnell, and Alexandre J.C. Terrien were not afraid to make some substantial changes from Senior Gift campaigns of the past. They eliminated the traditional House competition in favor of a unified class campaign; hosted additional Senior Gift events; and produced eight different Senior Gift videos, a number unprecedented in previous campaigns.

“Giving back through Senior Gift is a way to show support for future students, in the same way that past seniors and alumni have supported us. We are proud of the Class of 2011 for setting both participation and associates records this year, and we plan to continue the tradition of giving back as we enter the alumni community,” say the co-chairs.

The tradition of supporting the next generation of students at Harvard has always been an integral part of reunion giving. “Harvard has been a very powerful force in our lives,” says Joel Getz of the Class of 1986. “In particular, I think the need for financial aid really resonates for many people.”

As a participation chair for his 25th Reunion Class, as well as a reunion planning chair, Getz worked with classmates Suzy Le Boutillier and Steve Kovacs to champion a herculean effort to update contact information and get in touch with as many classmates as possible with extensive peer-to-peer outreach. Getz hopes this will inspire higher giving levels and increased attendance at reunion. Already, the class has seen a record number of submissions for the Harvard College Class Report.

For Getz, the collective response was the most exciting. “Our gifts advance excellence and leadership in higher education,” he says. “Together, we can provide Harvard with ample resources to support the minds and skills that can help solve the world’s most pressing problems.”

Maximizing the impact of a gift has also been critical for Tadhg Sweeney ’61, B.Arch. ’68. A loyal donor for many years, he wanted to do something significant in honor of his 50th Reunion. Together with his wife, E.V. Sweeney, he gave a $100,000 immediate use, unrestricted gift to the Harvard College Fund and then took it one step further.

He challenged his classmates to achieve 61 percent participation in honor of their reunion. If they reach this goal, the Sweeneys will give another $150,000 to the Harvard College Fund Scholars Program, thus creating scholarships for six students in the next year. The recipients will be known as the Class of ’61 scholars.

“We wanted to give a gift that would draw in as many of my classmates as possible,” says Sweeney, whose class is closing in on the goal.

For his classmates, he says, it has been especially motivating to know that their cumulative gift has the clout to make a big difference for future students. More than 60 percent of enrolling students in the Class of 2015 will receive need-based scholarships, averaging more than $40,000, and they will benefit from a record $160 million in financial aid.

“It’s not necessarily the size of the gift, it’s the impact of the gift,” Sweeney says. “People like the fact that their donation counts.”