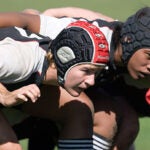 Harvard University announced today that it will honor one of the first Native Americans ever to attend Harvard College with a special posthumous degree at its 2011 Commencement exercises on May 26.

Joel Iacoomes, a member of the Wampanoag tribe, died in 1665 shortly after having completed four years of study in Harvard College but just before he was to participate in Commencement.

In addition to recognizing Iacoomes’ achievement as one of the two original Wampanoag students at Harvard, this special degree commemorates the historical bonds between Harvard and the Native American community as the University prepares to celebrate its 375th anniversary.

“It is fitting that we honor Joel Iacoomes as Harvard marks the 375th anniversary of its founding,” said Harvard President Drew Faust. “With the presentation of this degree, we also recognize some of the commitments that were fundamental to the founding of Harvard: a commitment to a diversity of students, a commitment to the communities in which the College was founded, and a commitment to the power of education to transform lives.”

Harvard was founded in 1636. Its charter of 1650 specifically cited Harvard’s role in the education of “English and Indian youth.” The Harvard Indian College, which Iacoomes attended, was founded in 1655. Iacoomes’ classmate and fellow Wampanoag, Caleb Cheeshahteaumuck, graduated from Harvard in 1665.

“The Aquinnah Wampanoag are delighted that this posthumous degree is being awarded to our own Joel Iacoomes,” said Cheryl Andrews-Maltais, chairwoman of the Wampanoag Tribe of Gay Head (Aquinnah). “Since he was from our island community, it means a great deal to us to see his extraordinary achievement recognized alongside his fellow tribe member, Caleb Cheeshahteaumuck, the first Indian to graduate from Harvard.”

“Joel was a gifted scholar and Harvard had a commitment to the Native American community,” observed Cedric Cromwell, chairman and president of the Mashpee Wampanoag Tribe. “This posthumous degree brings us full circle. It’s motivational for Wampanoags and I think it’s motivational for Harvard. It builds on our relationship.”

The degree for Iacoomes will be presented in the Tercentenary Theatre of Harvard Yard during the Afternoon Exercises of Harvard University’s 360th Commencement, which also serve as the annual meeting of the Harvard Alumni Association.