High yield for Class of ’15 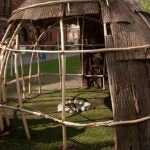 Students admitted to the Class of 2015 from the largest applicant pool in Harvard’s history have responded with great enthusiasm. At nearly 77 percent, the yield on admitted students exceeds last year’s 75.5 percent, and may rise further. Selected from upwards of 35,000 applicants, the class is almost complete.

Only a small number of other students, perhaps as few as 10 to 15, are expected to be admitted from the waiting list in the weeks ahead.

“The entire Harvard community offered an unprecedented welcome to the admitted students in April this year, ensuring they were fully aware of the remarkable new opportunities that await them at Harvard,” said William R. Fitzsimmons, dean of admissions and financial aid. “Beyond improvements in financial aid, substantial changes in the past decade provide new levels of support for students once they enroll, and enrich their academic and extracurricular experiences throughout their time at Harvard.”

Among the enhancements added in the past decade are: a program in General Education; a fourfold increase in the number of small freshman seminars; a program offering more than 40 secondary fields of study; the School of Engineering and Applied Sciences; an augmented advising system that doubles the number of freshman advisers to more than 400 (and also includes 200 peer-advising fellows and 60 resident proctors); expanded opportunities for close collaboration with faculty through research and regional centers; an arts initiative and the New College Theatre; and many options for studying abroad, supported by a $100 million gift from David Rockefeller.

More than 60 percent of the enrolling students will receive need-based scholarships, averaging more than $40,000, benefiting from a record $160 million in financial aid. Families with students on scholarship contribute an average of $11,500 annually toward the cost of a Harvard education.

“We are very grateful for the unwavering commitment of Michael D. Smith, dean of the Faculty of Arts and Sciences, Evelynn M. Hammonds, dean of Harvard College, and Drew Faust, president of Harvard University, to keep Harvard open to talented students from all economic backgrounds,” said Sarah C. Donahue, director of financial aid.

Visitas provides an opportunity for admitted students to experience Harvard life and meet future professors and classmates. This year’s program, which hosted a record 1,300 students, included a welcoming address by Faust, as well as faculty panels, departmental open houses, opportunities to meet with senior administrators, and myriad extracurricular and social activities.

Throughout April, faculty members, students, alumni, and staff called, emailed, and hosted admitted students in Cambridge and at Harvard clubs around the world. “We are enormously grateful to everyone who made such extraordinary efforts to reach out to the students admitted in this record-setting year,” said Marlyn E. McGrath, director of admissions. “Members of the Undergraduate Admissions Council, the Undergraduate Minority Recruitment Program, and Harvard Financial Aid Initiative were vital to our success.”

The Class of 2015 will be the most international in Harvard’s history. The yield on international students was an unprecedented 90.4 percent, and 11.9 percent of the class are citizens of other countries. “In addition to the warm outreach extended by our alumni interviewers abroad, admissions officers established personal links with admitted students with handwritten notes of congratulations,” said Robin M. Worth, director of international admissions. “Students are often surprised at how personal the admissions process is and how much we care about having them join us here in Cambridge.”

Harvard admissions officers will be on the road next week, traveling to 60 cities with representatives of four other colleges to recruit students for the Class of 2016. Harvard officers will visit 60 more cities in the fall with the same travel group, and 20 others with representatives of two other colleges. Letters will be sent to thousands of prospective applicants next week, providing the foundation for outreach to the most promising students.

“Year after year, nearly 70 percent of all of our students and 90 percent of our minority students have received such letters,” said Fitzsimmons. “In every way possible, we continue our year-round search for the next generation of Harvard students.”