Health reform may require a crisis 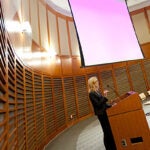 A new, more sweeping version of health care reform that provides universal coverage and controls costs is still a few years away, according to ABC-TV’s medical editor Timothy Johnson, M.P.H. ’76. Unfortunately, it likely will take a budget crisis to get it through Congress, Johnson said.

Despite the passage of national health care reform that extends coverage to the uninsured, ends discrimination against people with pre-existing conditions, and allows parents to keep children on their insurance until age 26, Johnson said even more sweeping changes are in the works that would create a system similar to Canada’s single-payer program.

The reason, Johnson said, is that health care costs in the United States remain far higher than those in other countries and are climbing fast enough to threaten the nation with bankruptcy within a few years.

“In five to seven years, we’re going to be facing true financial catastrophe, with the possibility of actual bankruptcy in this country,” Johnson said. “We’ll probably throw up our hands … and what we’ll probably do at that point is expand Medicare to cover everyone.”

Johnson, who is also the medical editor for the local ABC affiliate, WCVB-TV, and who holds appointments at Harvard Medical School and Harvard-affiliated Massachusetts General Hospital, analyzed America’s health quandary Wednesday evening (May 4) during the annual Lowell Lecture, sponsored by the Harvard Extension School and the Lowell Institute of Boston.

Johnson based his talk on his recent book “The Truth About Getting Sick in America: The Real Problems with Healthcare and What We Can Do.”  He was introduced by Dean of Continuing Education Michael Shinagel.

There are no easy answers to America’s health care problems, Johnson said. Per capita costs for health care in America are more than double those in other industrialized nations. Though some observers may say that the quality of care is better in America, Johnson argued that it is not more than twice as good, and the problems of the uninsured and of the bureaucratic burden placed on doctors far outweigh any benefits.

He attributed fast-rising health costs to malpractice costs, to the role of insurers, to the financial incentive to drug and medical device companies to sell more of their products, and to doctors and hospitals being paid on a fee-for-service model that rewards them financially for providing more care. He also said the media act as cheerleaders for new advances, which are demanded by patients even at greatly increased costs. America’s patients demand convenient, cutting-edge care, which has little personal cost.

“We want cutting-edge care even if the latest isn’t the best,” Johnson said. “We have this list of expectations but expect someone else will pay for our bill. That’s a recipe for disaster.”

True reform has been difficult because the people and businesses making money on America’s $2.6 trillion health care industry resist reform, he said. In his own recipe for a working system, Johnson said tort reform will be critical to reduce malpractice lawsuits that benefit only a few injured patients a year, as will changes to how industry players are paid to remove financial incentives to provide more care, even if unnecessary. Also needed are national information technology standards that will allow analysis and comparison of health outcomes, universal access to primary care, and a population that has overcome fears of greater government involvement in health care.

Johnson attributed the fear of government-run health care to politicians adept at scaring the public. The facts on the ground are that government-run health care programs are already in effect and are largely successful, he said. The Veterans Affairs health system is a successful model, where electronic records and physicians paid by salary keep costs down and quality high. Another example, Johnson said, is the Federal Employees Health Benefits Program, which insures millions of workers, including members of Congress. In addition, millions of America’s elderly get help through Medicare, which, though its costs are rising, has just 1.3 percent of its cost going to overhead, compared with 11.7 percent for private, for-profit insurers.

There is a chance the nation will avoid the budgetary calamity that seems headed this way, Johnson said. Massachusetts, which already has universal coverage, is now tackling the cost problem. With state political leaders and medical and health industry leaders located here and participating in the conversation about cost containment, Johnson said it’s possible they’ll succeed and point the way for the rest of the country.

Johnson likened the need for federal involvement in the health care industry to that of the airline industry. Federal regulations and oversight ensure that planes are inspected, maintained, and safe to fly. A health system where thousands die annually from medical errors could benefit from similar oversight, he said. Further, Johnson sees little difference in the government’s mission of protecting the public’s safety by providing police and fire services and protecting its health by providing health care.