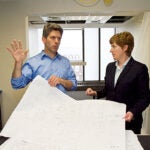 Since 2009, these teaching-focused postdoctoral positions have proven a boon to Harvard students, to academic departments across the Faculty of Arts and Sciences (FAS), and to the College Fellows themselves, many of whom have gone on to land tenure-track faculty positions in a tough job market.

This fall, departments from Statistics to Sociology to Slavic Languages and Literatures will welcome a total of 30 College Fellows. More than 500 individuals who’ve received their Ph.D.s since 2007 have applied.

“These exceptional new Ph.D.s have become highly valued members of virtually every academic department,” said Allan Brandt, dean of the Graduate School of Arts and Sciences, which has administered the program with the FAS Office for Faculty Affairs. “Departments have reciprocated with strong mentoring and support, doing all they can to make sure their College Fellows succeed.”

The Harvard College Fellows program arose from the financial crisis, when FAS had to reduce the number of visiting faculty brought to Harvard each year. To help compensate for this loss of teaching staff, Brandt engaged, with Nina Zipser, the dean for faculty affairs and planning, in “creative administrative thinking” to match the skills and interests of energetic young Ph.D.s with the needs of FAS departments.

“It lets the fellows do what they’ve been working so hard to do,” he said. “They benefit from working with our exceptional students, honing their teaching skills, and greatly enhancing their prospects in a difficult job market.”

While College Fellowships last just a year (with the possibility of renewal for a second year), the program does all it can to ensure that fellows become full-fledged members of their departments and of the broader Harvard community. Fellows devote 75 percent of their time to teaching, with the remainder set aside for their research and scholarship. They receive a salary and benefits, but as important, they receive intensive mentoring and training from faculty in their departments and from the Derek Bok Center for Teaching and Learning.

The first two classes of College Fellows have discovered an experience that gives would-be professors a leg up in the job hunt. Of 21 College Fellows in 2009-10, two-thirds either landed a tenure-track faculty position or so impressed their Harvard host departments that they were kept on for a second year.

After receiving his Harvard Ph.D. in Romance languages and literatures in 2008, Dana Lindaman found permanent jobs scarce and the competition fierce.

“The Harvard Fellows program allowed me to build my teaching corpus while polishing some of my own work,” said Lindaman, now an assistant professor of French at the University of Minnesota, Duluth. “I think that the extra year spent honing my craft helped me to feel more comfortable in the job interviews when it came to talking about my own teaching philosophy, career trajectory, and research interests.”

As a 2009-10 College Fellow in the Department of Romance Languages and Literatures, Lindaman was treated like a colleague and included in the rotation of department faculty teaching theory to graduate students.

“Former professors of mine now solicited my professional opinion,” he said, adding that they also served as mentors in his move to the other side of the desk. “You spend so much time as a graduate student learning the content that you hardly have time to deal with … the teaching and the administrative side of things.”

Several current College Fellows already have landed permanent academic jobs. Aarthi Vadde, who spent this year in the Department of English, has obtained a tenure-track job at Duke University. Thomas Herold, a member for the past year of Harvard’s Department of Germanic Languages and Literatures, will start this fall as assistant professor of German at Montclair State University in New Jersey.

“This position enabled me to ride out the storm of recession-induced reduced job prospects and gave me the cushion I needed to change my approach to the job market,” said College Fellow William Bares, who will take a tenure-track position in the fall as director of jazz and popular music studies at the University of North Carolina, Asheville. “Were it not for this program I simply do not know what else I would have done.”

“William has taught courses in areas we are normally not able to cover: jazz harmony and jazz improvisation,” said Shreffler, the James Edward Ditson Professor of Music. “The jazz course enrollments far exceeded our initial expectations and clearly filled a need for teaching in that area.”

Herold was similarly essential to his department’s ability to maintain course offerings this year.

“We had three ladder-rank faculty on leave for the entire year, so we really needed help to cover our curriculum,” said Judith Ryan, the Robert K. and Dale J. Weary Professor of German and Comparative Literature and chair of the Department of Germanic Languages and Literatures.

Herold filled the gap by teaching a new course titled “Love and Betrayal in German Literature,” as well as “German Literature from Goethe to Nietzsche” and “Advanced Conversation and Composition: The Two Germanies.”

“He has been doing a fabulous job in all of these courses, and we’re very pleased to have him as a colleague,” Ryan said. “The students really appreciated the care he took with their writing, as well as the way in which he conducted classroom discussions. I know this not only from anecdotal evidence, but also from the CUE evaluations he received.”

Though initiated in response to budget cuts, Brandt said he expects the College Fellows program to be sustainable and beneficial in the long run.