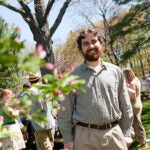 Faust to present medals on May 26

The Harvard Medal was first given in 1981 with the principal objective of recognizing extraordinary service to Harvard University. Extraordinary service can be in as many different areas of University life as can be imagined, including teaching, fundraising, administration, management, generosity, leadership, innovation, or labors in the vineyards. President Drew Faust will present the medals during the annual meeting of the Harvard Alumni Association on May 26.

2011 Harvard Medalists
Albert Carnesale ’78 (hon.) donned many hats during his service to Harvard. While concurrently serving as dean of the Harvard Kennedy School (HKS) and provost of the University, he served as acting president of the University during President Neil Rudenstine’s leave of absence. Upon Rudenstine’s return, Carnesale played an important role in the University’s $2.1 billion capital campaign, particularly with the “international aspects” of the campaign.

Carnesale joined the HKS faculty in 1974 and was appointed dean in 1991. During his term, he increased collaboration among faculty members and academic programs across the University, and by continuing in his position as dean while serving as provost, he strengthened the School’s ties with the rest of the University.

Known for his expertise in international affairs, national security, and science and technology policy, he has maintained ties to Washington over the years, serving as an adviser to every administration since President Richard Nixon’s. Carnesale retired from Harvard as Lucius N. Littauer Professor of Public Policy and Administration Emeritus in 1997; he then served as chancellor of the University of California, Los Angeles, from 1997 to 2006, and he remains a professor there.

Frances Fergusson ’66, Ph.D. ’73, president of Vassar College from 1986 until 2006 and professor of art emerita, is unequalled in the breadth of her involvement across the University. President of the Harvard Board of Overseers (2007–08), she serves on several visiting committees, including those to the College and the Graduate School of Design. She is currently the chair of the visiting committee to the Harvard Library, which advised on the reorganization of the Harvard libraries. A 1999 recipient of the Graduate School of Arts and Sciences Centennial Medal, she is a former head teaching fellow in Fine Arts 13 at Harvard and a 1974 Bunting Institute fellow at the Radcliffe Institute for Advanced Study.

She was a member of Harvard’s Presidential Search Committee (2006–07) that selected Drew Faust as Harvard’s 28th president and, most recently, she was a member of the Harvard Corporation Governance Review Committee, which embraced a number of significant changes, including its first expansion since its creation 360 years ago.

Peter Malkin ’55, J.D. ’58, cares deeply for Harvard, and his tireless service over the years has been substantial.

He has served on many boards and committees of the University: as an Overseer, an HAA elected director, a John Harvard Fellow, the founding chair of the New York Major Gifts Committee, and also as a member of the visiting committees to the Law School, natural and applied sciences, humanities and arts, and finance, management, and administration, and as a member of the College and Law School Dean’s Councils, among others. He is an original member of the Executive Committee of the Committee on University Resources.

Malkin has been a leader at the Kennedy School (HKS), serving as founding chair of the Dean’s Council, a member of the visiting committee continually since 1986, and chair of the campaign executive committee during Harvard’s last capital campaign. A generous donor to HKS, he has endowed professorships, contributed unrestricted funds, and made possible the Peter and Isabel Malkin Penthouse in the Littauer Building.

Malkin has also directed major gifts toward the Law School and to the Faculty of Arts and Sciences, including the first electronic classroom in Hauser Hall and the restoration of the Malkin Athletic Center, and has served as reunion gift co-chair for every reunion of his Harvard College and Law School classes. He also chaired the College’s Schools and Scholarship Committee for Greenwich, Conn.