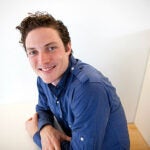 At 16, Shauntae Smith gave her first sermon, “It’s Time to Be Pure” — a challenge to her generation “to take a claim and be honest that our lives have meaning and purpose.”

But to get to that podium, with that message, Smith endured adversity that might’ve otherwise hardened her. Born in Brooklyn, N.Y., to a single mother who died when she was 7, Smith was raised by her grandparents. Her grandmother was a pastor, and as Smith grew up, she saw firsthand the behind-the-scenes activities of running a church.

“I became involved in all roles of the church,” recalled Smith, “without knowing it was preparation for my vocational aspirations.”

But one thing always nagged at Smith, and, at the age of 15, “God answered one of my silent prayers, which was to have a mom and dad,” she said.

While switching churches, Smith reacquainted herself with its married co-pastors, one of whom had been friends with Smith’s mother growing up.

“They always wanted a daughter, and I always wanted a mom and dad, so we made a covenant to be the answer to each other’s prayers,” she said. “I always say God loves me much because he blessed me three times: I was born to my biological mother, raised by my grandparents, and when I was 15 I received what I consider my second set of parents who ushered me into ministry. My grandparents gave me that cultivation, but my parents gave me my first pulpit to ever preach from.”

Smith became a licensed minister at 17. She preached for 10 months before embarking to a faraway land — North Carolina — to study business administration at Bennett College, a historically black all-female college.

Just shy of graduation, Smith returned to Brooklyn for a church conference. The guest minister took her aside and said that attending graduate school was part of God’s plan for her. “He told me, ‘Whatever school you’re choosing, God is going to make it happen for you,’” Smith remembered.

A month later, a Bennett College professor emailed Smith information about Harvard Divinity School (HDS). “I ran into my parents’ room freaking out,” she said. “HDS was the only school I applied to, so, in a sense, HDS chose me.”

HDS expanded Smith’s definition of ministry. Soon after arriving in Cambridge in 2008, she took a position as a student-admissions representative. “It allowed me to help prospective students discern if HDS is a place they can call home — and, to me, that’s ministry,” she said. “What I’ve gained from the Divinity School is a portable pulpit.”

Smith will return to Brooklyn after graduation to lead her church’s youth ministry, called R.E.A.L. (Raising Empowered Anointed Leaders). “My passion is college ministry,” said Smith. “Helping students of color get into college and graduate on time, helping with the admissions process, financial aid, everything.”

But this won’t be her only job — Smith hopes to work as a college placement coordinator at a Brooklyn charter school, and she hopes to establish a transitional home for women who have suffered abuse, an idea that grew out of a class project at Bennett.

“At Harvard, I’ve been shaped by the narratives and traditions of students whose faith and background are different from my own, without compromising who I am and what I believe in,” she said.