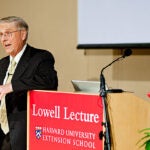 Health reform may require a crisis

'Man without a face' leaves Brigham and Women's Hospital for home

Dallas Wiens, who in March became the first person in the United States to receive a full face transplant, described the simple joys of holding his daughter, Scarlette, and smelling lasagna again as he prepared to leave Harvard-affiliated Brigham and Women’s Hospital Monday (May 9) for his Texas home.

Wiens appeared at a news conference with physicians who have been key to his treatment since a horrific 2008 accident left him literally “a man without a face.” Wiens’ face was destroyed when a cherry picker he was working in came into contact with electric wires. Plastic surgeons at Parkland Hospital in Texas saved Wiens’ life, but wound up removing much of the tissue from his face and replacing it with skin from his back.

The nearly two dozen operations he endured saved his life, but left his face featureless. He was unable to smell and had difficulty breathing. His eyesight was destroyed in the original accident.

The face transplant surgery was performed by a team led by Bohdan Pomahac, an assistant professor of surgery at Harvard Medical School and surgeon in the Brigham’s Division of Plastic Surgery. Pomahac also led the surgical team that — just weeks after Wiens’ surgery — performed a second full face transplant on a 30-year-old Indiana man whose face was badly disfigured when he came in contact with high-voltage wires after a car accident.

“I’ve called this operation life-saving. He was quite literally a man without a face,” Pomahac said of Wiens. “This face transplant will allow Dallas to more fully participate in Scarlette’s life — a true gift.”

Wiens’ 15-hour surgery was conducted by a team of more than 30 doctors, nurses, anesthesiologists, residents, and others. It included transplanting from an anonymous donor the forehead, facial skin, nose, lips, and internal nasal structures, as well as the underlying muscles and nerves.

Wiens described the joy of having features again, saying that shortly after the operation he ran his fingers over his nose and lips, which are already feeling like his own. He described how his 4-year-old daughter climbed into his lap and took in his new visage.

“She was amazed. She actually said, ‘Daddy, you’re so handsome,’” Wiens said.

Wiens expressed thanks for everyone involved with his case from the start, the donor and donor’s family, the physicians at Parkland who saved his life, and the team at the Brigham who gave him a new face. From here, he said, he plans to go “back to my life,” spend time with his family, and be a good father to his daughter.

The surgery restored Wiens’ ability to breathe through his nose and his sense of smell. Over the next six months, his new face should continue to heal, giving him feeling and control of the facial muscles. He must take anti-rejection drugs for the rest of his life to ensure his immune system doesn’t attack the grafted tissue.

Wiens lost his eyesight in the original accident and is still blind. Though Pomahac said he initially thought Wiens would be blind forever, he said Monday that there may be procedures in the future that might restore sight to the eye that wasn’t destroyed in the accident.

The Brigham team led by Pomahac has conducted three such surgeries. In addition to Wiens’ and the second full face transplant just weeks later, Pomahac and his team did a partial face transplant in early 2009. Pomahac said Monday that the field is still so new that surgeons are gaining knowledge with each procedure they do. Though the surgeries are conducted today on people badly disfigured with no conventional alternatives, Pomahac said the field may open up as they learn more.

Jeffrey Janis, the Parkland Hospital surgeon who participated in the original procedures after Wiens’ accident, also spoke Monday, praising the Brigham team and saying that just two years ago when the accident occurred, such a procedure was not even a possibility. He called the successful surgery “absolutely historic” and a “new frontier” in plastic surgery that represents new hope for people who’ve suffered disfiguring injuries.