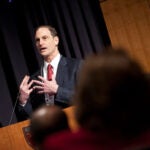 More evidence of health benefits in cup(s) of joe

Men who regularly drink coffee appear to have a lower risk of developing a lethal form of prostate cancer, according to a new study led by Harvard School of Public Health (HSPH) researchers. The lower risk was evident among men who drank regular or decaffeinated coffee.

The study was published May 17 in an online edition of the Journal of the National Cancer Institute.

“At present we lack an understanding of risk factors that can be changed or controlled to lower the risk of lethal prostate cancer. If our findings are validated, coffee could represent one modifiable factor that may lower the risk of developing the most harmful form of prostate cancer,” said lead author Kathryn Wilson, a research fellow in epidemiology at HSPH.

The researchers chose to study coffee because it contains many beneficial compounds that act as antioxidants, reduce inflammation, and regulate insulin, all of which may influence prostate cancer. Coffee has been associated in prior studies with a lower risk of Parkinson’s disease, type 2 diabetes, gallstone disease, and liver cancer.

Coffee drinkers were more likely to smoke and less likely to exercise, behaviors that may increase advanced prostate cancer risk. These and other lifestyle factors were controlled for in the study.

The results need to be validated in additional populations that have a range of coffee exposure and a large number of lethal prostate cancer cases. If confirmed, the data would add to the list of other potential health benefits of coffee. The authors are planning additional studies to understand specific mechanisms by which coffee may lower the risk of lethal prostate cancer.

The study was supported by the National Cancer Institute at the National Institutes of Health, the American Institute for Cancer Research, and the Prostate Cancer Foundation.