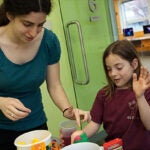 In celebration of the city of Cambridge and of the country’s oldest University, the joyous peal of bells will ring throughout Cambridge today (May 26).

Three of the 15 bells known to have been in use in Massachusetts before 1680 were hung within the precincts of the present College Yard, including the original College bell and the bell of the First Parish Church, which has ties with Harvard that date from its founding. Harvard’s first Commencement was held in the church’s meetinghouse. One of the chief reasons for selecting Cambridge as the site of the College was the proximity of this church and its minister, Rev. Thomas Shepard, a clergyman of “marked ability and piety.”

Another church ringing its bells in celebration is Christ Church Cambridge. The oldest church in the area, it houses the “Harvard Chime,” the name given to the chime of bells cast for the church in anticipation of its 1861 centennial.

Referring in 1893 to the “Harvard Chime,” Samuel Batchelder wrote, “From the outset the bells were considered as a common object of interest and enjoyment for the whole city, and their intimate connection with the University made it an expressed part of their purpose that they should be rung, not alone on church days but also on all festivals and special occasions of the college, a custom which has continued to the present time.”