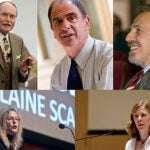 On October 16, 2005, the scholarly world lost an extraordinary intellect and teacher, when Barrington Moore, Jr. died from complications of pneumonia at his home on Larchwood Drive in Cambridge, Massachusetts, surrounded by thousands of treasured books and copies of manuscripts completed and in progress.  During his 92 years, Moore witnessed the upheavals of the twentieth century and devoted himself to a life of rigorous scholarship. Without big money grants or a vast research team, he crafted influential books and shaped the sensibilities of younger scholars who have gone on to set agendas in political science, sociology, and history.

A scion of privilege, Barrington Moore, Jr., was left mostly to his nurses when his parents separated and then divorced.  Raised from age nine by his maternal grandparents in Newport, Rhode Island, Barry’s warmest tie was to his grandfather, Lewis Cass Ledyard, an accomplished corporate lawyer who also served as private attorney to J. P. Morgan.  The youthful Barry loved mountain climbing during European summers, but found “disagreeable” his six-year stint at St. George’s boarding school, where he was bullied by wealthy classmates.  Much of Moore’s lifelong ambivalence about authority and privilege came from his emotionally complex upbringing.

After boarding school, Moore earned his B.A. in Classics at Williams College, and then studied for his Ph.D. in Sociology at Yale, where he worked under the tutelage of Albert Galloway Keller (who had himself been a disciple of William Graham Sumner).  Moore mastered multiple languages, including Greek, Latin, and Russian.

World War II intervened after graduate school.  Side by side with Herbert Marcuse, H. Stuart Hughes, Franz Neumann, and others who became lifelong friends, Moore served as a civilian analyst in the U.S. Office of Strategic Services.  During this time, he met a Japanese-American woman, Elizabeth Ito, whom he married in 1944, much to the consternation of his upper- class family. Barry and Betty became lifelong partners.

Following two years in the interdisciplinary Social Science Division at the University of Chicago, Moore joined Harvard’s Russian Research Center in 1948.  He could have progressed to a tenured professorship, but, having no patience for departmental routines, became a Senior Lecturer in 1951, as which he taught and did research until his retirement in 1979.

Major books marked Moore’s scholarly evolution, starting with works published in the early 1950s on the politics of the Soviet Union and moving toward capacious explorations of the ways in which societies from ancient to modern times handle enduring dilemmas—as in Reflections on the Causes of Human Misery and Upon Certain Proposals to Eliminate Them (1972) and Injustice: The Social Bases of Obedience and Revolt (1978).  His final published collection was Moral Purity and Persecution in History (2000).

In the middle of his career came Moore’s masterwork, Social Origins of Dictatorship and Democracy: Lord and Peasant in the Making of the Modern World.  Published in 1966, a time when much of the rest of U.S. social science engaged in grand theorizing or specialized quantitative research, Social Origins compared six countries over hundreds of years, probing the ways in which landed upper classes, peasants, and monarchs set the stage for revolutions from above and below that pushed nations toward fascism, communism, or liberal democracy.  No path toward modernity, Moore concluded, was smooth or lacking in oppression and sacrifice; yet some paths were morally superior in his telling.

In the New York Times, J. H. Plumb called Social Origins “a profoundly important book” and observed that “throughout . . . there is a constant play of mind that is scholarly, original and imbued with the rarest gift of all, a deep sense of reality.”  This book made Moore—along with Berkeley’s Reinhard Bendix and Harvard’s Seymour Martin Lipset and Samuel P. Huntington—a leader in comparative historical sociology and comparative politics.

All of Moore’s writings reflected his sardonic sensibility—attuned to life’s ironies and cruelties as well as its pleasures and triumphs.  Each study was meticulously crafted, often written in a logical conversational style that posed an important question and weighed considerations and evidence before reaching a conclusion.  Drafts were handwritten from personally assembled research notes.  When a full draft was done, it was turned over to Betty Moore, who subjected it to thorough editing and double-checking.  Major works took years to produce, but Moore was not in a rush.

Life in the Moore household was equally structured.  Except for occasional interludes of mountain climbing, skiing, and sailing, Barry devoted himself to research and writing. Many summers were spent on a yacht moored off the coast of Maine, where a morning dip in icy waters was a prelude to writing, using books and notes assembled during the academic year.  Then came a late lunch and a chance to sail.  It was a kind of intellectual monasticism, punctuated by scheduled interludes of pleasurable physical activity.

From time to time, the Moores entertained friends or fortunate students.  After a dinner prepared by Betty, intellectual conversation with longtime friends could stretch for hours; but when the guests were students, Dr. Moore rose abruptly at 9:00 p.m. to announce “Children, it is now bedtime.”  In his final years after Betty’s death from a long illness in 1992, Barry took pleasure from visitors to his home and, for as long as he could, from jaunts to teach younger colleagues to ski or sail.

Teaching at Harvard was Moore’s other life calling.  He and Betty had no children, but their intellectual progeny were multitudinous.  Moore was a devoted co-founder and early tutor in the Social Studies program.  His graduate seminars taught comparative politics by asking students to draw evidence from many historical studies to describe what happened in a major transformation; test hypotheses about why it happened; and then tell the reader so what?—why it matters.  Mere academic quibbling was shunned, and discussions were sometimes conducted by what Moore jokingly called the “Socratic totalitarian method,” in which he went around the room until he found a student who gave an adequate answer.  So stressful could his courses be that students were known to gather for a glass of wine before venturing to class.

During the turbulent 1960s, Moore had a deserved reputation as a critically minded intellectual, but was deeply offended when protests against the Vietnam War threatened sacred university routines.  He memorably spoke against disruptions at a contentious Harvard faculty meeting in 1969, and held classes as usual during student strikes.

Never a professional impresario, Moore did little to further student careers beyond writing recommendations. Still, his instruction and example had a profound impact.

There is no orthodox “Moore School” in contemporary social science; the very idea is an oxymoron. But there is a distinctive Moore approach, featuring a commitment to tackling important questions, an aversion to theories that ignore historical contexts, and a commitment to interdisciplinary research comparing nations and civilizations.

Barry outlived Betty by more than a decade. At the time of his death in 2005, he was survived by his brother, Dr. Peter Van C. Moore of Bethesda, Maryland, who has since died.  Moore’s two nieces are Laura Thomas of Asheville, North Carolina and

Helen Miles of Washington, D.C.  In the fullest sense, Barrington Moore, Jr., lives on through the scholarship of his students and appreciative readers, and in the work of those they in turn inspire. Moore’s bold and rigorous approach reverberates through the generations—in the scholarly world without end.