Baby, it’s been a wild ride 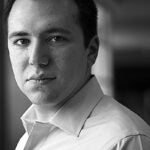 Lena Eisen likes to describe life’s challenges as adventures. Moving from Colorado to Cambridge for an intense year of graduate study was one type of adventure. Doing it while expecting a child was another entirely.

When she graduates today from the Harvard Graduate School of Education (HGSE), her husband and 4-month-old son will be in the audience.

“I don’t think anyone would say, ‘Here’s the plan, let’s do grad school and have a baby at the same time,’ ” laughed Eisen, a former roller derby competitor with a “sassy” edge. “Nobody would say that’s a good idea, but it’s turned out to be good in a variety of ways.”

Eisen accepted Harvard’s offer last April. She found out she was pregnant a month later. Her initial thought was that the graduate year would be “impossible,” but exploring the idea further, she concluded it could work.

With backing from Harvard administrators and the support of her then-fiancé, who agreed to stop working as a general contractor and move with her to be a full-time dad when the baby arrived, she packed her belongings and headed east.

After participating in the HGSE’s Higher Education Program, Eisen hopes to use her new master’s degree to help students prepare for life after high school.

Working for years at a camp for students with AIDS and HIV and later as an administrator of an alternative high school, Eisen said that too often she saw students give up on their educations, certain they weren’t smart enough to make it at four-year colleges, or convinced because of health issues that they wouldn’t even reach adulthood.

That work, she said, “triggered a lot of my thoughts about how you become ready to be an independent adult.”

In some ways, the path is also personal for Eisen, a first-generation college graduate who lacked direction and guidance during her early college years.

She is focused on issues concerning access to higher education and ways that students can succeed at the academic as well as the social and emotional levels.

“I don’t think we can adequately approach education reform in this country without looking at higher education issues. By ignoring what happens to students after high school, we’re not finishing the job.”

At Harvard, problems with edema resulted in carpal tunnel syndrome in her wrists, making it hard to type. Simple matters like crossing the street quickly or finding a comfortable place to study became difficult for her. But the camaraderie and the support of her classmates sustained her.

She praised her fellow students who made meals, took notes for her in class, organized a surprise baby shower, and even offered to accompany her during the delivery if needed.

“My cohort was such a huge part of this experience,” she said, close to tears. “They are a tremendous group of people.”

Her son, Emerson, arrived on Jan. 26. Thanks to her husband, Eric, she was back in class just over a week later.

“He’s my partner, and he is my best friend. There are so many players that I couldn’t have done this without,” she said, “but he definitely is the key.”

Eisen considers herself lucky and calls attending Harvard a “luxury.” She balks at the label superwoman, recalling her sister’s struggle to “make it all work” when pregnant at age 19.

“People are being very generous and kind when they compliment me in that way,” said Eisen. “But I am not a single mother trying to buy diapers, I am not out on the street somewhere, I am not working three jobs to make ends meet — and pregnant.”

Still, she realizes her story can help inspire those worried about balancing motherhood with the rest of life.

“There is a nice message to send people on not foreclosing on your ability to go to graduate school — or to do anything else for that matter — because you are pregnant. I don’t want anyone else thinking they can’t do it.”

During a conversation on a windy afternoon at the Graduate School of Education, a fellow student passed Eisen. With twins on the way and a second year of graduate school to go, he asked about her son and told her, “I draw my inspiration from you.”

“You can do it,” Eisen replied, smiling.