A school telescope, through the Internet 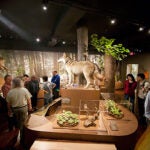 A walk through forests — without rain

Harvard scientists are creating a group of interstellar “ambassadors” who are helping to explain the universe in school classrooms through a web-based program that lets students soar through space to view planets, stars, and the gassy clouds where the latter are born.

The Worldwide Telescope Ambassadors Program is the brainchild of astronomy Professor Alyssa Goodman, who has been working with Microsoft programmers for several years on their Internet-based Worldwide Telescope, a free program. Goodman has worked with its creator, Curtis Wong, at Microsoft Research, suggesting updates and changes that have added functionality useful to researchers.

Through the main interface, users can zoom “through” the universe to explore. A click of the mouse will call up links to research databases, putting the current knowledge about a particular stellar body or region at the user’s fingertips. For more-basic users, there are also a series of “tours” — guided introductions to specific astronomy topics — to get them started.

The ambassadors program, cosponsored by Microsoft Research and WGBH, is run by Patricia Udomprasert out of Goodman’s Viz-e-Lab. The lab was founded earlier this year to develop ways that researchers can visualize and manipulate large data sets. The lab emphasizes low-cost, affordable technology and has developed a 3-D interface with the Worldwide Telescope, using a standard high-definition, flat-screen television and Microsoft Kinect, an add-on to the software giant’s Xbox 360 system that lets users control games with their bodies. The result is that users can navigate the 3-D universe not only with a mouse and keyboard but, at least in the Viz-e-Lab, by standing in front of the screen and moving their arms to swim closer to or further from an object.

Goodman says that the technology, though still experimental, is just one example of new ways to interact with the large sets of data accumulated by projects affiliated with the lab, such as the Dataverse, Seamless Astronomy, and High Dimensional Data Visualization and Interaction. While data in the past has typically been displayed in charts and graphs, technology in recent years has enabled the collection of such large volumes of data that traditional display methods are inadequate. By displaying the data in three dimensions or by interacting with it graphically, researchers may be able to not only better explain what they’ve found but also understand it better themselves, Goodman said.

The ambassadors program takes that same approach to teaching astronomy. The ambassadors themselves are astronomy-savvy individuals, such as retired astronomers, astronomy hobbyists, researchers seeking to add an educational component to their work, and even Harvard undergraduates interested in the subject.

In one year, the ambassadors program has grown from several ambassadors working with 80 students in one school to a dozen ambassadors and 400 students at two schools, Lexington’s Clarke Middle School and Prospect Hill Academy in Somerville, Udomprasert said. Goodman and Udomprasert said they hope the program will continue to expand as funding becomes available.

“People learn with this in a different way than they do with books,” Goodman said.

Michelle Bartley, a sixth-grade science teacher at Clarke Middle School, where the program kicked off last year, said the traditional curriculum required students to do projects on subjects covered in class, like constellations and the life and death of a star. The Worldwide Telescope not only engages this generation of video-savvy kids better, it allows them much greater freedom to explore the universe on their own and to pick astronomy projects that follow their interest.

As Bartley taught the year’s astronomy lessons, ambassadors were there to help, working one-on-one with students, helping them if they got stuck with the software, and allowing them to move ahead with their projects.

“They’re phenomenal,” Bartley said of the ambassadors. “They’re there from day one, walking around the class and talking with the kids. The program really gets kids excited about astronomy.”

Dick Post, a retired businessman and member of the Amateur Telescope Makers of Boston, worked with Bartley and other Clarke teachers two days a week this spring. He said that with 20 kids in a class working on the software, it’s critical that someone other than the instructor be there to help.

“Even if you know the program, the kids will do something you’ve never thought about,” Post said. “This age group is amazing. You can’t believe how fast these kids learn.”