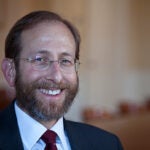 William Nunn Lipscomb Jr., emeritus professor and winner of the Nobel Prize in chemistry in 1976, died at age 91 in Cambridge, Mass., on Thursday (April 14) of pneumonia and other complications resulting after a fall.

According to The Royal Swedish Academy of Sciences, his studies of boranes and related chemical compounds “enormously enriched” the field and provided scientists with “a deeper insight into the nature of chemical bonding.”

Years later, during his retirement, Lipscomb participated in the gentle mockery of this accomplishment by joining other Nobel laureates as participants in the Ig Nobel Prize ceremonies, held in Harvard’s Sanders Theatre.

Lipscomb was born in Cleveland and grew up in Lexington, Ky. He earned a bachelor of science in chemistry at the University of Kentucky in 1941 and a Ph.D. in chemistry at the California Institute of Technology in 1946. Before arriving at Harvard, he taught at the University of Minnesota from 1946 to 1959. He is survived by his wife, Jean. He also is survived by three children, including two from an earlier marriage, as well as three grandchildren, and four great-grandchildren.