Thinking outside the gilded frame 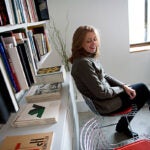 A passion for unloving art

But in a sun-drenched corner of the Monroe C. Gutman Library, Burch’s colorful, playful paintings have turned Harvard portraiture — a tradition with rather strict rules of succession — into a democracy.

“I wanted to take the idea and reinvent it,” she explained. “You have people up there who would have never been hung on a wall at Harvard. That shifts their reality and how they feel about themselves. It sort of turns it on its head.”

Then again, Burch is good at stretching the creative possibilities of the seemingly well-defined. An artist by nature, she took a job in Harvard’s yard operations and carved it into a role that allows her to help plan and execute a variety of art exhibits at the Center for Government and International Studies (CGIS) — and even headline one.

Her new exhibit, “Let’s Hang Out: An Encore,” which runs through April 28, expands on a series of 28 portraits of faculty, staff, and students that she showed at CGIS last year. After seeing her work, John Collins, Harvard Graduate School of Education (HGSE) librarian and the Gutman Library’s director, asked Burch to paint the members of the HGSE community.

The resultant portraits include everyone from well-known HGSE custodian Jeffrey Moura, to student Michael Clarke from Barbados, to Catherine Snow, Patricia Albjerg Graham Professor of Education, who wears a jaunty black hat and a grin in her picture.

“This is such a unique and powerful way of displaying the diversity and strengths of the community,” said Kathleen McCartney, HGSE dean and Gerald S. Lesser Professor in Early Childhood Development, who also sat for Burch.

A California native, Burch moved east in her 20s, worked day jobs in publishing, and dabbled in music before deciding to dedicate herself to painting.

“Painting was the one thing that completely engrossed my being,” Burch said. “When I paint, it makes time stop.”

She joined Harvard Physical Resources in 1998. “I was painting all the time, so I was just looking for a part-time gig,” she said. She transferred to CGIS five years ago when the complex opened and joined a crew of four that manages the buildings.

When a spot on the CGIS art board opened up, Burch jumped at the chance to help coordinate exhibits there.

“It’s thinly disguised in any job I’ve held that I have this bounding enthusiasm for the arts,” she said. “I think my boss thought [working with the art board] was just going to be a once- or twice-a-season thing. But it morphed into art coordination.”

She has coordinated more than 50 exhibits in CGIS South and Knafel, including a series of student shows she launched last year.

“It’s been a fabulous experience for me,” Burch said. “I’ve been able to see departments grow in their enthusiasm for art … and each show is a challenge. It keeps me light on my feet.”

When she’s not at Harvard, Burch is usually in her studio at her Davis Square apartment, producing oil paintings and animal portraits for clients, or working on larger commissions, such as a recent series for the Harvard Academy for International and Area Studies. She often works from photographs, which allow her to “capture that split second where a guard is lowered … where a person feels wholly who they are.”

While she enjoys the challenge of new media and techniques, discovering the face, and the person behind it, never gets old. For the somewhat reserved Burch, who dreads giving toasts at her show openings, portrait painting invites her (and her audience) into a dialogue with her subject.

“It gives me a chance to embrace and feel close to humanity in a wide range, to bring out the good in people,” she said.

A few of Burch’s subjects turned out at the Gutman Library for the exhibit’s opening night in late March, including Michèle Stanners. Stanners, now a Harvard Divinity School student, met Burch while on a fellowship at the Weatherhead Center for International Affairs. She paused to consider her portrait in which, wrapped in a textured shawl, she smirks ever so slightly at the viewer.

“It’s honest, it’s pure, it’s sensitive,” Stanners said. “I like that she’s managed to capture a sort of capricious element.”

In painting her CGIS colleagues and now the HGSE community, Burch hopes to share the sense of awe and respect one feels for the accomplished subjects that grace Harvard’s more traditional gilded-frame portraits.

“I look at those people of eminence, and I can see that they’re amazing,” she said. “But I also look at anybody, in any position in life, and find things that I think are equally amazing.”