The aged game of rugby 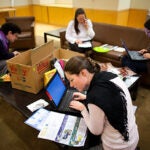 “This is it. This is the shed,” said rugby player David Sackstein ’14, taping his knee inside the metal facility, about the size of what you’d expect in someone’s back yard. “This is the clubhouse, locker room, weight room,” he said, gesturing, before racing away to join his teammates for practice.

It’s a sparkling April day. The team splits off into squadrons across Cumnock IIII, a grassy division adjacent to the Jordan field hockey grounds, all manicured and outfitted with lush Astroturf, unlike Cumnock. Cumnock is dirty.

“There’s a real geese problem,” said rugby co-captain and blindside flanker Connor Heard ’12. Behind him, his teammates scrimmaged and practiced lifts, sprinting, and falling to do push-ups on ground sullied with geese droppings and mud.

Nearby, there’s a plastic coyote to ward off animals, a makeshift mascot perennially frozen in mid-howl.

Between the shed, the swampy conditions, and the coyote, there’s an odd beauty that perfectly personifies the rough and tumble rugby aesthetic. The oldest club team in the nation — formed in 1872 — the rugby squad and Harvard’s other club sports don’t have the same competitive opportunities as varsity sports, nor do they receive as much funding.

Yet even with nominal means, the rugby team is living life large, without much complaint. After practice with their coach, David Gonzales, “we do indeed walk home in dirt,” said Heard, because the players don’t have locker room facilities.

Minus the soap and hot water, they’ve achieved another kind of glamour, however — a spot in the men’s division I collegiate national tournament.

Led by Gonzales, a worldly Brit by way of Australia, and a former member of the British army, the team “has huge opportunity to add to the rich tradition of Harvard rugby,” said co-captain and fly half Gabe Cunningham ’13. In 1984, the team was the national champion, was a finalist in 2003, and won the Ivy League tournament in 2007.

When pressed about what he loves about rugby, Gonzales, who speaks with an Australian accent, said, “What’s not to love about the sport?”

“It’s every sport rolled into one, and it’s got so much to offer in terms of the skill set, the physical challenge, the camaraderie, that other sports fade in comparison when it comes to the demands and requirements of playing a game of rugby.”

On the field, Gonzales said he can be “completely democratic one minute, and a dictator the next.” That philosophy is working. The team lost just two games in the fall, and it has been playing European rugby unions in preparation for its first playoff game against Northeastern on April 30. The team will play either the University of Buffalo or the University of Southern Connecticut on May 1 and hopefully make it to the final four in Glendale, Colo., a few weeks later.

“We’re up against other teams that have much bigger playing pools, much bigger athletes, strength, and conditioning, more fulltime coaching, so we’re up against it,” said Gonzales, “but we’ve got a few weapons in our armory as well.”

“We can’t afford to take anyone lightly. Harvard rugby is the oldest team in the country, so we’re a great scalp for any team to take.”

Gonzales fell into coaching by accident. He played for years before tearing his ACL three times and deciding on another direction. He said life is all rugby, all the time.

“I’ve got over 150 players, about six coaches, and when you look at the strength and conditioning, the tactics, the strategy, the player management, the administration, the organization, the alumni, the budgets, putting training together, studying game tape, there really isn’t too much that’s outside of rugby.”

There’s a brutal magic to the sport, agreed Heard. “Rugby fosters the strongest sense of team through the nature of the game — it’s extremely physical, and no one can make a good play without using your teammates.”

“Other people may view it as a bunch of big guys running full speed into each other with no pads, but rugby’s actually a chess match,” echoed Cunningham.

Gonzales said that his team will continue to perform well, despite the lack of resources. “America as a rugby nation is suffering,” he said, “but the sport of rugby isn’t going away.”